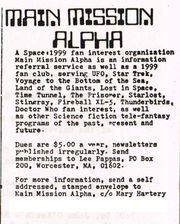 a 1976 ad for the club and newsletter 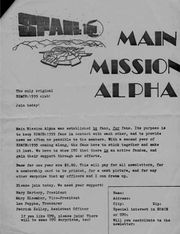 From a 1980 flyer: "NMA was first organized in February of 1976, receiving official recognition in August of that year, both from ITC and from one of the regular actor of the series, Nick Tate (Captain Alan Carter). Since then, Main Mission Alpha has grown to become one of the largest SPACE:1999 fan clubs in the world, with members in England, Canada, Australia, Denmark and Sweden."

The club is now divided in the way it will be run. We have two presidents, two vice—presidents, two chairmen, two alternate officers, and then, members. Ranks will still hold, but with some variations. As it stands, I am still commander, but Dale Jones, the other president, is a commander, too. The VPs and the other officers are of the rank of colonel, and the members are of the lieutenant rank. There is only one Captain rank - which Nick Tate holds, as honorary member and aegis of the club.

Dale and I have agreed to split the country down the middle, and handle members from our own side of the country. Depending wherever else in the world you are, the map will show which area of the club you will be a member of. That is, Australia, Japan, China, anywhere west of Moscow will fall under Dale's power. Europe will be under my power. (I sound like we're going to end up ruling the world, don't I?)

The same club materials will be allotted on both sides of the continent. The only difference will be where they are from. Newsletters may come out more frequently as we both may have a lot of news. There will be (hopefully) two journals a year. For this, I'd like to hear people writing to me, with questions for Nick to answer. If someone other than Nick has to answer your question, I'll do my absolute best to try to get your question answered. MAIN MISSION ALPHA is not just a Nick Tate fan club, although Nick is the only one who is in communication with us. I'd like to hear from Martin Landau, Barbara Bain, Tony Anhold, Catherine Schell and Zienia Merton fans, plus those who are interested in the show for its special effects, for the scientic technology, for any one of a dozen things. The club will be as diversified as its members make it. The other officers of the club are: VPs: Mary Bloemker and Steve Sample; Co-chairpersons: Pat Brimer and Darlene Palenik; Alternate Officers: Lee Pappas and Stephen Eramo. [1]

In 1978, it had a change in leadership. This is a personal statement from Mary Hartery:

Two years ago, Main Mission Alpha was formed to join together fans in Space:1999. It was noble idea, and though some backlash came into our club after some time, my time spent in this club was good, and I enjoyed making friends with those whose ideals matched my own. Now, two years have passed. I look back, for the most part, with good memories to gaze upon, and there is nothing that can take some of those memories away from me. But I've outgrown my club, outgrown the ideals I set for myself two years ago. New ideas, new meanings in life have emerged for me. I may sound melodramatic, but don't be mistaken -- I am sad that I can no longer share this common interest with you, the club members. I've taken on a new responsibility and I forsake all other responsibilities to make this new venture work out as it should. You can read more about that later on is this issue. [2] It is my life -- my new future. And there is no one who can say that I am not the best person in the world to take on its responsibility. So, sadly, I am leaving Moon Mission Alpha. Your new commander, Mary B., who has taken on the club for the past few months and is doing a good job of running the club. I will probably have honorary member status from now on, and that will be more than enough to suit me. I wish you all well, and hope for everyone, the best life has to offer. [3]