Alpha Log was the yearly clubzine published by Main Mission Alpha, the oldest of the Space: 1999 fan clubs. It is a gen zine. Two issues have been scanned here.

Club members were sent the first four issues of this fiction/art zine once a year in the spring as part of their dues. In a cost-saving measure, the fifth issue was offered only as a separate purchase.

Alpha Log was the club fanzine for the Space: 1999 club, Main Mission Alpha. In the late '70s, many zines were published as part of a club's activities, and Main Mission Alpha was no different. The zines were pubished [sic] annually, and distributed to all active members as part of their club membership. Main Mission Alpha was born at one of the early Star Trek conventions in New York City. Mary Bloemker was originally the club vice president, but took over responsibility for the club from the founder when she moved west, and began publishing the club zine with issue #2, with assistance from the club VP, G. Paradis and other local friends. At the time, the club had over 200 members across the US. Each issue would contain art, stories, poems, limericks, articles, crossword puzzles, and more submitted by club members. The club zine ran for five issues, ending with the fifth issue in 1981. [1] 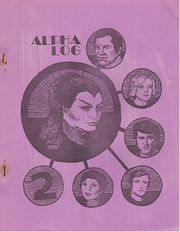 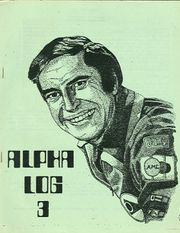 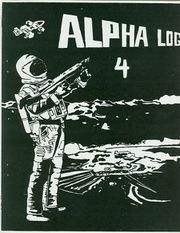 "A Step Towards the Future" is a short-short tale about a thirteen-year-old David Kano and his earliest attempts at computer maintenance (which aren't very successful as his father's lab computer goes *kerput* after David's fiddling with it). It isn't great literature, and certainly won't make Dickens rise from his grave fearing for his reputation, but it's a smile-bringer. And if Kano's folks were as nice as Meta's made them to be, Kano surely must have missed them sorely after "Breakaway." In the poetry department: Two of my favorites were "Looking Back: The Childhood of a Commander" (which should have had the alternate title, "A Loss of Unicorns") by James Herbert, which is a brief but eloquent soliloquy by John Koenig on the loss of earth and the magic of childhood, and Terry S. Bowers' "She Sleeps Now," another short poem based on "Journey to Nowhere." "The Luck O' the Irish, or It Was Just One of Those Daze Days" is yet another "what-the-Alphans-do-at-home-when-no-alien-Avon-ladies-pop-in-on-them" story but, unlike most I've read, this one is good. A bit heavy-handed humor-wise, but the characterizations ring true, and its ending brings a lump to your throat (but mayhaps mine was due to an errant Dorito?) and tear to the eye, if you're sentimental. There's also a Space:1999 "Mindbenders #1 Journey Crossword" puzzle which not only looks like it is a mindbender, but looks like Patrick put his whole heart and soul into it. And the very best piece of prose in the zine: "Stress Factor." A VERY good story with excellent plotting, characterizations and a lot of believable "throw-away" scientific theory. An uninhabitable planet is happened upon by Alpha with lots of tiranium, that precious ore vitally needed on the Moonbase. A crew is selected to penetrate the hellish atmosphere of the planet's gravitational pull opens a stress pocket in the catacombs beneath the base. It all adds up to oodles of suspense and clammy palms for the reader. Excellent...[2]

Alpha Log 5 was published in fall 1981. It is offset and has about 40 pages of fiction, art, and poetry. 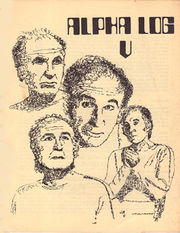