Luffyko is the term English-language One Piece fandom uses to refer to the genderswapped version of the manga's protagonist, Monkey D. Luffy. 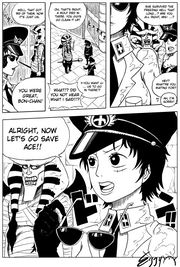 The trope's name comes from an April Fools prank organized by the administrators of the One Piece fan forum, Arlong Park. Like many other manga/anime forums, Arlong Park often releases spoiler scans/photos of current chapters a couple days before full scanlations are available online. For the prank, organizers created a fake spoiler scan portraying a female Luffy and posted it in that week's spoiler thread. [1]

Many fans believed the fake spoilers to be true because a new character with the ability to change people's genders had just been introduced in the manga and had befriended Luffy. Other fans doubted the legitimacy of the scan since fake spoilers are rampant within the Big 3 Manga fandoms.

Forum members took to calling the genderbent protagonist "Luffyko." Luffyko became the feminized version of the protagonist's name because many female Japanese names end with the syllable ko.

Inspired by Rule 63, fandom adopted the nickname and began to use it in fanworks depicting a genderbent Luffy. The LiveJournal community, luffyko, was created two weeks after the April Fools prank reveal, even though it welcomes genderbending of all One Piece characters, not just the protagonist. [2]

Despite its origin as a nickname, Luffyko is mostly used as a tag in headers and story notes to indicate genderbent content in fanfiction. Within the actual narrative of the story, the character's name usually remains Luffy.

Fanart also has many examples of the trope. Unlike the Japanese-language fandom's version of genderswap, salad, the tag is only used to refer to female Luffy.