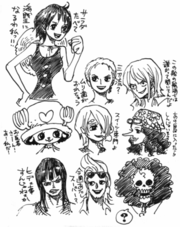 Salad is shorthand for "The Pirate King is eating salad," the term One Piece fans use to refer to genderswap. Although the term is predominantly used by the Japanese-language fandom, some English-language fans have adopted it due to exposure via sites such as Pixiv.

The trope's name comes from an illustration drawn by Oda Eiichiro, One Piece's mangaka, in one of the Q&A sections included in the tankoubons. A reader had asked Oda to draw genderswapped versions of the Strawhat Pirates. He did so and added a tagline to each of the illustrations. Although most of the taglines remained the respective characters' signature catchphrase, except taken to their stereotypical masculine or feminine extreme, three of the characters had their phrases slightly altered. Monkey D. Luffy, the main character of the manga, was one of these and his tagline became: "I'll eat salad and become the Pirate King!" [1]

Japanese fans adopted the pseudo-official examples, resulting in virtual uniformity across the character designs depicted in fanart.[2] In addition to the Strawhat Pirates, the fandom has expanded to draw genderswapped versions of other characters. Popular choices include Portgas D. Ace, Boa Hancock, members of the Whitebeard Pirates and the Shichibukai. Some fans have noted the similarities and commented on the fandom's ability to take the idea and run with it:

Because what's interesting about OP isn't that there's a significant standout genderswap fic, it's the fact that it's uniform across the fandom. girl!Luffy is always called Luffyko. girl!Ace is always called Anne. Plus the whole salad thing in Japanese fandom and how all the genderswapped Mugiwara look the same no matter what artist is drawing them. [3]

Salad is not to be confused with Luffyko, which comes from an April Fool's Day prank organized by the One Piece forum, Arlong Park, and refers to the name English-language fandom uses to refer to genderbent Luffy.

Within salad, there are many common names and tags adopted by the fandom to indicate genderbent content.