Kill the Dead is a 1980 book by Tanith Lee. It follows the adventures of Parl Dro (ghost killer) and Myal Lemyal (musician and pickpocket) as they journey towards the ghost city of Ghyste Mortua. Ciddy Soban (former witch, now powerful ghost) is the antagonist - who shares a bond with/attempts to seduce Myal and who is out for revenge against Dro.

Tanith Lee is the author of two episodes of Blake's 7: 'Sarcophagus' (1980) and 'Sand' (1981). Paul Darrow reputedly claimed the main characters from 'Kill the Dead' were based on Avon and Vila[1], which seems very likely given the names of the characters in question are Parl Dro (Paul Darrow) and Myal (Michael). The chief characteristics of both characters (and in Vila's case, special skills i.e. thieving) and dialogue patterns are also very familiar: 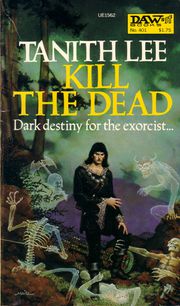 The original cover of the 1980 edition depicts Parl Dro in a black and silver-studded costume much like the most iconic costumes worn by Kerr Avon in Blake's 7. Cover art by Don Maitz.

"You could pretend to be astounded," said [Myal] the musician. "It wouldn't kill you."

The musician shrugged and trudged the rest of the way up the slope. When he stood directly over Dro, he produced the bag of pebbles he had thieved the previous night. He threw it dramatically at Dro's feet.

"That was a nasty trick," said the musician.

Lee herself claims that Parl Dro was only based visually on Paul Darrow:

Although I had much enjoyed examining Avon's character a little, inside the legitimate bounds of Blake's Seven, I would not have dreamed of trying to reproduce him elsewhere. So, it is Paul Darrow the actor, who is acting Dro in these pages. A man damaged both physically and mentally by his bizarre and tortured trade, a man who, frankly would have, I think, earned both Avon's contempt, and Avon's complete horror. ... The last misunderstanding that has added itself to Kill the Dead is that Michael Keating (Vila in Blake's Seven) plays the part of Myal Lemyal. Sorry, he doesn't.[3]

It seems probable that most of the fannish interest in 'Kill the Dead' is a result of interest in Blake's 7.

This is the story of Parl Dro, the ghost slayer (look at Paul Darrow's autograph and you will see where the name comes from). His eventual sidekick, Myal Lemyal, bears a strong resemblance to Vila. Although I don't like all of Tanith Lee's books, I did enjoy this one. It has a strong plot and an extremely novel twist at the end. (Judith Proctor)[4]

The earliest and best- known example of this sort of thing. A fantasy featuring ghost- killer Parl Dro and minstrel and pickpocket Myal Lemyal, with plot elements suggestive of "Sarcophagus," one of the two B7 episodes written by Lee herself. Parl Dro is plainly an Avon clone, and his name is said to derive from Paul Darrow's scribbly signature. Furthermore, the book is dedicated to "Valentine," P.D.'s middle name. Fans generally see Myal as Vila, but in this case the resemblance is less obvious. (Sarah Thompson)[5]

Yeah, "Kill the Dead" is a good book (novella, actually, I think), and it's DEFINITELY Avon and Vila--there's no doubt there. The "Avon" character is named "Parl Dro", the "Vila" character has a name similar to Restal, as I recall, and they are physically and temperamentally so close as to be fan fiction by any other name. Tanith Lee wrote two produced scripts for B7, and she also dedicated "Kill the Dead" to "Valentine", which is Paul Darrow's middle name. It's a well-written, fairly gripping fantasy with tons of good character relationship stuff between "Avon" and "Vila". Suzan Lovett did at least one lovely piece that I've seen prints of, with Darrow and Keating's features used for the characters. I'm not sure if it's still in print--I had to dig thru the used bookstores for my copy. Our public library had a hardback version where it was put with another novella and together the two were titled "Sometimes, After Sunset", so you might find it that way, too. [6]

Fans' Comments Regarding the Novel Itself

Other reviews of the novel can be found in the following Blake's 7 fanzines:

Some time between 1991 and 2007, Deborah Walsh of Vendredi Press planned a 'Kill the Dead' only zine called Ghyste Mortua (after the ghost city from the book). On her own site, Walsh explains:

[This] zine was going to be my masterpiece. I had amazing stories - oh, fabulous stuff. Gorgeous art. It was going to be massive. I was exploring special black mailing envelopes, and I was designing a special insignia to use for wax seals on the envelopes. [7]

The zine was closed down after its potential existence was mentioned to Lee by her publisher.

[Lee] was very concerned at that moment in time that any hint that her novel - which was currently out of print - might be construed as stepping on BBC copyright. The zine died a sudden and definitive death. Much of the work I'd accepted found its way into other zines, but I could not publish it.[8]

It seems likely that the 'other zines' mentioned by Walsh include Southern Seven, which had two 'Kill the Dead' covers and at least two KtD fics: