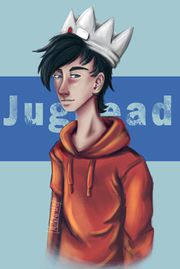 Jughead fanart by Loulou North
Jughead Jones is an Archie Comics character. He currently also appears on the live-action adaption, Riverdale. In the comics, he wore a distinctive crown-like hat derived from the early 20th century whoopee cap; in Riverdale, this has become a knit beanie with a pointed-edged brim turned up.

Since the comics started, Jughead has never been a huge fan of women; he remained distant from Archie and Reggie's near-constant interest in dating. The joke has been that he is in a relationship with food. Some fans feel that he was clearly coded as gay in the older comics, however in the 2016 issue Jughead #4 it is stated that he is asexual.[1]

In the CW show Riverdale, Jughead appears to be heterosexual. This depiction has received some amount of criticism.

On the CW drama Riverdale Jughead is portrayed by Cole Sprouse. Jughead narrates the events of the show as he writes a novel about Riverdale and the mystery surrounding Jason Blossom's death.

Jughead Jones is a popular character within this fandom. After the first season, Jughead was the most talked about Riverdale character on Tumblr.[2] Some believe that Jughead's popularity is in part due to his actor's former role on Disney's The Suite Life of Zack and Cody, where Sprouse played Cody.[3]

Jughead Jones is most commonly paired with his canon girlfriend Betty Cooper, and his canon best friend Archie Andrews. [4]