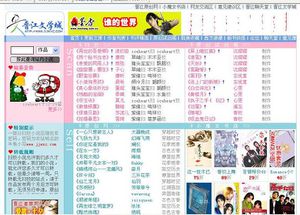 The homepage for Jinjiang Literature City in 2005. Source: Jinjiang BBS

Jinjiang Literature City, also known as jjwxc, is a major Chinese-language website for publishing and serialising online novels. It is home to a wide variety of genres of online fiction, including romance, historical fiction, wuxia, fantasy, and danmei. The site is also used to host Chinese-language fanfiction and translations of fanfiction from other languages into Chinese.

Some of the most popular Chinese TV dramas of the last decade, including Guardian, Scarlet Heart, Empresses in the Palace[1] and The Untamed were adapted from novels originally published to Jinjiang.[2] The site is home to a direct payment business model that allows particularly promising authors (as determined by the site's editorial team) to put portions of their work behind paywalls. "VIP" users can pay to unlock these chapters, at a rate determined by wordcount. The resulting revenue is split between Jinjiang and the work author.[1]

Due to the heavily restricted and policed nature of China's internet and the nature of many of the works it hosts, Jinjiang has undergone crackdowns at various points in its history and been forced to censor its content or require readers to censor their content. The most recent of these was in May 2019, and the website was forced to close two of its sections and suspend publication of new content for 15 days.[3][4]

Jinjiang also has a BBS/forum area with sections for literature fans, anime fans and film and television fans to start up discussions.

Although the site's creation date is commonly given as 2003, a series of posts made to the Jinjiang BBS in 2005 show that the website was founded in 1998.[5] 2003 may have been the year that Jinjiang started to accept original works, or the year that the current version of the website was created. Its founder was a user by the name of SUNRAIN.

Jinjiang started out as a website for publishing pirated Taiwanese novels, before beginning to host works of original fiction, which quickly began to outnumber the pirated content.[6][7] The site was originally volunteer-run, but underwent a number of financial difficulties and changes in ownership before being purchased by Shanda Interactive Entertainment Limited in 2007.[8] In 2008, the site adopted its "VIP" system of payment for content to combat increasing commercial pressure.[7]

In 2014, a web pornography crackdown resulted in Jinjiang temporarily shutting down a few of its forums and adopting a reader-assisted self-censorship system ("三审机制") for content. This prohibited sexual content from being published on Jinjiang's main site.[7] Five years later, a renewed crackdown on internet content in China banned military-related romance, danmei, and any remotely sexual content below the neck,[9] and resulted in Jinjiang shutting down two of its historical and fantasy romance sections, and suspending publication of content for 15 days in order to undergo a full review.[4]

In 2010, a group of Jinjiang users who were opposed to the site's increasing commercialisation and self-censorship founded an offshoot forum called Gongzi Changpei (公子长佩, also known as Young Nobleman Changpei) that was aimed at reviving the free (in multiple senses of the word) spirit of early danmei writing.[10] The forum later became commercialised in 2017.[7]

On Jinjiang (and other Chinese fan websites), there is a divide between fans who ship a pairing in different sex positions - that is, which character is the "top" and which character is the "bottom". Ship wars between fans of different positions are common, and many fans will report fics of the "opposite" position (e.g. fans of A topping and B bottoming will report fics where B tops and A bottoms) to the site for smut content in a bid to have them deleted.

The news was discussed in a Novel Update forum thread titled with the prediction "A massive DMCA takedown notice incoming from jjwxc".[12] Fan translators on twitter also spread the news, expressing their concerns about the terms on the new site.[13] Suika commented that the problem wasn't so much that Jinjiang would own the copyright on any translation, but that there was nothing to stop people from uploading other people's existing fan translations.[14] llwy_jmoon concluded, "TLERS, PROTECT YOUR TLS. RUN. RUN. THEY ARE COMING. RUN. password protect, go private, delete, do what you need to, but get ready for this to go down as an absolute shitshow."[15]

The site itself was not yet launched, and the reported site rules may have been provisional. What was reported in English-speaking circles seems to have been based on a Jinjiang forum thread.[16] However, Jinjiang and other for-profit webnovel sites do not have a good reputation for respecting creators, and cnovel fans recalled a previous incident involving Qidian vs. WuxiaWorld.[17][18] Fans were primed to expect the worst.

Many fan translators reacted to the news by locking down their translations and/or making them harder to find and copy.[19] Because Novel Updates has a policy of only linking to publicly available translations, the locked translations were removed from Novel Updates, making it seem that fewer novels had been translated.[20] The overall effect in the short term was to push English cnovel fandom further underground and make it harder for new fans to join the fandom.