Jeff Goldblum is a ubiquitous actor known for quirky and/or intellectual roles, with a distinctive delivery all his own. He has starred in a number of cult classics and fan favourites.

His widespread popularity is encapsulated in a Tweet from SimonR @Simonreah which announces "Someone who works at a charity shop put Jeff Goldblum in every single photo frame". This is accompanied by four photos of the said frames on display. The Tweet currently has over 40,000 Retweets and Comments, and over 134,000 Likes.[1] 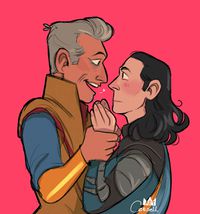 Fanart by Cherloak of The Grandmaster and Loki

Goldblum is active on social media, and is interested in fan activities. For example, he shares fanart of himself or his characters on his Instagram - with credit!

Goldblum is also aware of shipping - including Loki/The Grandmaster, Tom Hiddleston's and his own characters in the Marvel Cinematic Universe. While being honoured as an icon at the 2018 British GQ Awards - and after being introduced by Tom Hiddleston himself - Goldblum said:

You know we were in that movie Thor: Ragnarok, and we played Loki and Grandmaster, respectively. And, now when I go on to pathetically and obsessively — my hashtag Jeff Goldblum on my Instagram account I’ve seen many, many — I don’t know if you’ve seen them, Tom — many, many sketches and renderings and cartoons of our characters involved in what seems to be a deeply romantic and wildly sexual relationship. I tell you this I cherish every single one of those, and I will for the rest of my life. Tom Hiddleston, ladies and gentlemen: a very, very tender lover. I’m sure. I’m positive.[2] 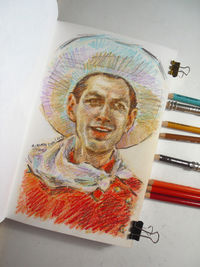 Why is there a watermelon there? drawing of New Jersey by Amanda Casady