It's Greek to Me

From an ad in Media Monitor #34: it has "a cover that must be seen to be believed." 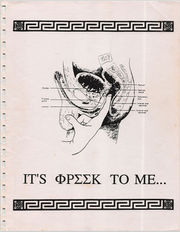 "[This zine’s cover is] why Bill Hupe used to include a piece of plain brown paper over the cover when he bound the zine." [1] Another fan wrote: "The cover put me off, though. YUCK!" [2] 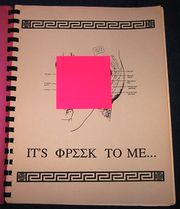 for sale on eBay, the cover with the good parts covered up 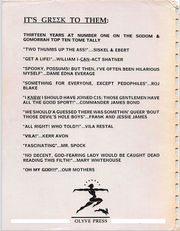 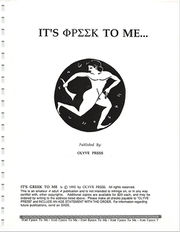 The Age Statement: Not for Our Moms

It required an age statement: "It's Greek To Me is a multi-media zine proudly and unapologetically offering explicit same-sex adult literature for the discerning slash connoisseur. This publication will not be knowingly sold to persons under the age of eighteen or our mothers."

See reactions and reviews for Sealed with a Kiss.

I like the first story in it and the last story in it. The rest mostly annoyed me profoundly. I am still too asleep to go into detail here, but the Captain Kangaroo/Mr. Greenjeans vignette stands out in my memory as being especially gratuitous. Also the story about Cowley getting it on with a young queer agent. Completely beyond the bounds of credibility, and also utterly disgusting (personal opinion). Also, in one of the B7 stories, Blake calls Avon "baby" and "arrogant snot." Believability goes right out the window. I'll stick with MFae. But I do like the way the zine is produced: the photos are great, and I don't mind the anatomical drawing on the cover. Many people need to know where a prostate really is, so in addition to being humorous, the cover art is...educational!

[zine]: People who like to read realistic slash or hate torture-fic will hate this 'zine, so be warned. It also includes a real doozy of a badfic, see Sealed with a Kiss. [4]

[zine]: There are illustrations. The front page illustration is a very clear (an interested visitor spotted it from the other side of the room) black and white anatomy diagram of the male genitalia. It's only on the second glance that you notice the inserted finger. Internal illustrations include various full and part-size black and white photos of the characters. They are publicity shots rather than images from the programmes, I think. Pros gets the most, which is as it should be, obviously! There is one colour publicity shot of a bare-chested Martin Shaw all soft-lit and sultry (not my idea of Doyle at all, but pretty!) There are also a number of black and white images derived from Greek artwork filling in white space. A Greek alphabet font is used on the foot of each page to identify the story. I like this idea, but it makes trying to flick through to find a story quite frustrating.

Editing: well, obvious typos were minimal, and no spelling errors (if you are American, at least), but I thought there were a lot of odd word choices - 'vaunted' for 'flaunted', 'a teste' ('testis', surely?), 'maleficently' ('malevolently', perhaps?) and the like - in the text. There was also the wrong name once in one of the Pros stories - of a protagonist.

A flaw for me all through the zine was the non-British feel to the Pros and B7 stories. It wasn't simply a failed but worthy effort with the dialogue. It came through in dialogue and narrative all the time. I don't know enough about B7 fandom to be sure, but I did wonder whether Vila's peculiar uneducated (underclass? thick? which was it meant to be?) voice - far in excess of anything in the programmes themselves - was in fact a fanon thing, because it came up in all the B7 stories in this zine. But even if it is, the same rationale doesn't work for Pros.

Rough Ride, by Caroline Dare. 32pp. I had read Rough Ride on the CD and knew what to expect. The very first line is "He's a pretty one, innit he?" If that looks fine to you and you like rape storylines - to maintain his cover and to keep Doyle alive, Bodie must rape Doyle in front of a baying gang - you will like this. It's not so much the storyline in itself that gives me problems (although I have trouble with biker gangs hanging around undetected in clearings in unspecified locations in 70s Britain) but I don't like the long discussion at the end before the resolution - some of the emotions expressed make me wince, and some of the views expressed make me stare. The resolution itself is also something I have trouble with. A characteristic of all the Caroline Dare Pros stories I have read is that they combine very hard actions with very soft sentiment, and this is no exception. My major problem is that I just can't get past the Americanisms in both narrative and dialogue. There are pieces of UK slang in the dialogue, but they are words that would never be heard in the same sentence as each other. Finally, and oddly, Ray suddenly becomes Troy at one stage. I eventually worked out why when I found a Troy in one of the non-Pros stories in the zine by the same author. (This was fixed in the web version.) Available online:

Running the Gauntlet, by Daphne Demure. 9 pp. Fun with nipple piercings. Some nice images, but again full of odd word choices (someone 'vaunting' their piercings) and non-UK dialogue ('"did ya?"') and narrative ('Ghod'). It's probably not a good sign that I found myself more intrigued by the dedication to a fellow fan for 'research one step beyond the norm'.

Never Send a Boy, by Terry Romero, 8 pp. A Cowley story, but not with either of Bodie or Doyle. I am not automatically opposed to a gay Cowley except in the general sense that it starts veering into 'everyone at CI5 is gay, wahey!', but I have to be convinced that he'd act on it. He's the head of CI5, sans peur, sans reproche, reads the lesson on Sundays, all that: how likely is it that he'd risk everything for a single night, especially if he has managed not to for 30 years? This story didn't convince me. And, again, language: 'lats flaring', 'virgin ass'. No, these are not words Cowley would think. Didn't like this, sorry.

String of Pearls, Daphne Demure, B7, 12pp, Avon/Vila, first time, PWP, all triggered when Vila tries to filch a strong of pearls which, as Avon tells him, don't go around your neck. Didn't feel particularly Blakes 7. It wasn't just the voices being wrong, or Avon being dressed in 'terry' and leather, but things like 'an ancient oriental eroticism' - wouldn't 'ancient Earth' be more likely? I am also not keen on either 'perfect orbs' or 'potatoes' (as in 'meat and...') as descriptions for testicles, and definitely not in the same paragraph.

Star-Crossed Lovers, Daphne Demure, 1.5pp. A nickname is given in the last line, so I presume that's the twist, but I didn't recognise it and I don't know who this is about. Older characters, one caring for the other on a midwest ranch; the other has dementia.

Nights in the Wilderness - Tenaya, Alias Smith and Jones. 31pp. I have never seen the programme, nor read any stories before. I liked this a lot more than the preceding stories. There's a plot (revolving around kidnap, rape, revenge and rescue) and an evolving relationship, the US writing entirely suits the subject, and there are no characterisation worries for me because I don't know the characters. I did get the impression there was plenty of canon stuff in the backstory. Nights in the Wilderness, by Tenaya: online

Snow Ride, by Caroline Dare, B7, Blake/Avon. h/c of a hypothermic Avon. Brilliant image of sex on back of a galloping greathorse, oh yes. But again, voices and dialogue all wrong for (my idea of) Blakes 7. I even found myself thinking 'I'd like this a lot more if it were some other space/scifi universe... hmm, this would work for Star Wars...'

A Nice Night's Entertainment, by Chase. 4pp PWP. The characters aren't revealed as far as I can tell. There are mentions of physical traits, but I didn't recognise the people. It's a first person monologue addressed to another, narrating a night beginning with mild bondage which progresses to fisting. One thing I noticed and which surprised me a little: there is nothing to give the sex of the narrator. One thing I noticed and which surprised me a lot: erm... oh dear, I'm not sure I should mention this. It is to do with anatomy and physiology, and it made me very dubious about the rest of the story. Ask in the comments, and I'll explain. But remember, you did ask :) And who was it about?? Was I meant to know?

Sealed With a Kiss - Jade Drofsny, B7, 11pp, Blake/Avon. Set after the episode The Keeper. Blake can't stop thinking about Avon's comment in that episode that he (Avon) nearly left. Blake's not having that: the crew needs Avon, he needs Avon, Avon is his, and they both discover how violently possessive Blake is. Characters sound much more like themselves in this - except for what they're actually saying, if you see what I mean.

Manhunt - Caroline Dare, B7. 47 pp. Avon/Vila (Avon/OMC, Vila/OMC) Editorial says this was previously published elsewhere, but now has an 'additional 16 pages of torture, rape and romance'. No kidding. Avon and Vila kidnapped by OMC antagonists. Rape, humiliation, forced sex with each other before escape (see title). More plot, more rape, then rescue. I read all this happily enough, and then winced at the resolution. I am probably going to hell for this, but I am much happier reading rape stories than I am reading 'and gentle sex makes it all better'. Also, the use of the term 'catamite' in the narrative (rather than a character using it of another) disturbed me somehow. (ETA: Just discovered that this too is available online)

Overall: I added this into my order of zines at the very last minute, because there was room for another without adding to the postage. I couldn't find any information whatsoever about it online beyond the list of titles (and I had read Rough Ride), so I didn't know what to expect. Of the Pros stuff, I liked Rough Ride the most - despite my complaints, every so often there was a line that really worked, and neither of the others really grabbed me - and of the rest, the ASJ one. But if you're only looking for Pros, this is not where I would start. More that two thirds of the Pros content by page count is online, and of the other two, Bodie and Doyle don't actually appear in one story.

I must admit that if this had been the first zine I had bought, I am not sure I would have bought more so rapidly. Which is a pity, because there are other American zines which get the language and characterisation right. Re-reading this, I am concerned that it looks like I am slagging off all the writers. I'm not, honestly! I am just not personally keen on (for example) one author's tendency to introduce very gentle emotion into very hard-edged scenes, and I do think that the language on the Liberator is much more BBC English, and... yeah, I've said all this already.