Isabela: Psst. I've got some of it written down now.
Varric: Give it here.
Varric: "Her breasts strained against the leather jerkin like two wild stallions corralled against their will." (Chuckles)
Varric: "She pounced—the smooth moves of a jungle cat—and locked her thighs around Donnic's waist. He—"
Aveline: What?
Isabela: Nothing.
Aveline: What is that?
Isabela: Shh! (Giggles)
Varric: Isabela just thought she'd celebrate your love affair with a... written dedication.
Isabela: It's "friend-fiction!" I do it out of love.
Aveline: I will never, ever be clean again. [1]

Isabela is less popular than Anders and Fenris on the Dragon Age Kink Meme. She is most frequently paired with Hawke (often F!Hawke) or Merrill. If Hawke doesn't romance Isabela or Fenris in-game, they begin an offscreen sexual relationship during Act III. Despite their (potential) canon relationship, there aren't many Fenris/Isabela fanworks.

Isabela is a flirt, and very much enjoys sex. She is popular in some segments of the LGBTQ+ fandom for her open attraction to both men and women. Some fans see her as a survivor for leaving an abusive, forced marriage and 'owning' her sexuality as a result [2] . While other fans of the game criticize Isabela for her free expression of her sexuality:

But what is really pissing me off are all the people calling Isabela a whore, "hoe," or slut. I've seen her called such about a dozen times now, in various threads.

What's the deal here? She's a strong, confident woman who doesn't give a rat's ass what anyone thinks of her. But it never fails--any time a woman chooses to be a sexual creature on her own terms, people---usually men, of course--label her a whore or some variation. [3]

Another example of misogyny in fandom directed at Isabela occurred on Tumblr. After the initial post, some fans replied with their support of Isabela and her pro-sexuality stance[4]:

Can I just say just how much I disliked Isabela’s character? I disliked her in “Dragon Age: Origin” because of her promiscuity and I disliked her even more in “Dragon Age II” because of her promiscuity. I thought having a romantic relationship with her might change her whore-ness but nope! Even after having a 100% Friends relationship, she had the balls to ask Zevran for sex, right in front of my character. She even invited him for a threesome! I threw up a bit in my mouth when she ask for a foursome in “Dragon Age: Origins” and I threw up a bit in “Dragon Age II”. I know she’s just a video game character but I really hope I never meet a girl like her in real life. A female who is proud of her whore-ness and sexual conquests are distasteful to me. Definitely not the kind of lover or wife for me. -ilovelisteningtomusic

>...Isabela is gorgeous, sensual, sexual and free-spirited. I would love to have a girl like her in real life, someone who is not afraid to be herself, who isn’t held back by men’s ridiculous, sexist double standards. Women are human beings, too. We feel desire and we like sex just like men do. And if we want to have sex with multiple people — with multiple people at once — then that’s our fucking choice. Secondly, take your whining out of the character tag and keep it to yourself. It’s highly disrespectful to tag character hate. -whitethornwolf

>...Boo hoo, she won’t change for you. If you get into a relationship hoping that someone will change the parts of their personality that you don’t like once they’re ‘attached’ to you, you’re doing it wrong. Thanks for the slut-shaming and misogyny. Please do go replay the game and infantilize Merrill so I can hate you twice. -impressioniste

>Also in response to the edit, the fact that you are so oblivious to how horribly misogynistic your whole post was is kind of disgusting. It may have just been a video game, but your issues with women obviously go far beyond the TV screen. -pho-carrot 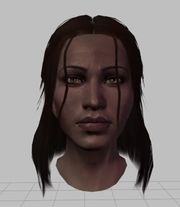 Isabela's race is also a source of some controversy. In DA:O, Isabela's skin appears lighter than it does in DAII. According the TPTB, this is due to a problem with the lighting in Isabela's DA:O scenes. Some people still insist that Isabela is white. [5] There is a mod that allows players to turn dark-skinned, dark-haired Isabela into a blonde-haired white woman. [6]

Many people see the white Isabela mod as an example of racism, while others say that the mod is a question of personal taste:

"If you don't like it, don't download it" has nothing to do with the issue. If there was a mod called "white Isabella, because it's so much better than having a black person running around" we wouldn't even question a discussion about it, would we?
So the question to debate actually is: is it racist or just personal taste? [7]

One commenter on Tumblr said of the issue:

But nonetheless, I say it’s pretty racist if it’s so damn hard to accept Isabella’s appearance the way it is that someone has to make her look white in order to make her tolerable to look at. [8]

The 2012 Dark Horse comic Those Who Speak featured Isabela being tortured in order to force her to reveal her real/original name. Some fans took this as an insult to the character, and fix fic was produced in response.[9]