Is This a Pigeon? 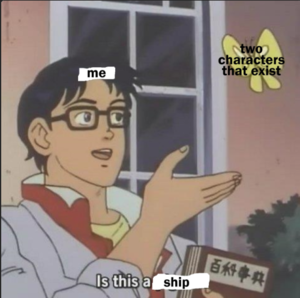 Example of meme. The guy is labeled "me" and the butterfly is labeled "two characters that exist". The dialogue says, "Is this a ship".

Is This a Pigeon? is a meme that originally showed a character from the anime The Brave Fighter of Sun Fighbird incorrectly identifying a butterfly as a pigeon. Text is placed over the butterfly and over the man and the question will be changed accordingly, often showing someone confusing one thing for another. The meme was first used in late 2011 and early 2012, but has seen a resurgence on Twitter in 2018. Fans will use the meme to gently make fun of oblivious characters and sometimes fandom itself.