League of Legends is a Multiplayer Online Battle Arena, or MOBA. Included in this page is a very brief overview of the game, but it is mostly about the fan practices from the fandom, consisting of art, cosplay, and videos, along with links and examples next to the text. As this is Fanlore and not Wikipedia, the focus of this article is not the technical aspects surrounding gameplay, but rather the fan practices.

When a player begins playing League of Legends, they are a level one "Summoner". A Summoner is a player, in the eyes of the lore provided within League of Legends. Summoners then summon different Champions to fight for them. When a game begins, everyone begins at level one on Summoner's Rift (classic 5v5) 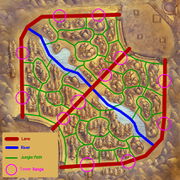 The map for League of Legends. Lanes are referred to Top, Mid, Bot.
and The Twisted Treeline (3v3), and at level three on The Howling Abyss (All Random All Mid, or ARAM) and Dominion (a game mode where teams have to capture objectives and hold them to win). As the game progresses, the champion gains levels. Experience is gained by destroying minions in each of the lanes (top, mid, or bot) or in the jungle, destroying turrets, and killing enemy champions. In Dominion and ARAM modes, experience is gained over time as well. Ways to gain gold for buying items for your champion each game include killing jungle camps and lane minions,killing enemy champions and taking objectives, such as turrets, and epic monsters, which include Dragon and Baron Nashor. The Dragon gives global gold to the killing team, that is, all team members receive gold whether they helped or not. 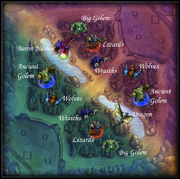 These are the where the jungle camps are located on both sides of the map.
Baron Nashor gives that, along with a buff to each living team member that increases magic damage and physical damage, plus a boost to health and mana regeneration. Both epic monster also give global experience. In game, a champion's max level is 18. After the game is over, you gain experience for your Summoner, and Influence Points, or IP, to buy more champions or runes to give you an edge in game. A Summoner's max level is level 30, which is when a player unlocks Ranked play. When a new game begins, your previous games don't affect you. Your champion is back to their original level, stats, and starting gold, save for different runes and masteries a Summoner is using. Runes are objects you may buy and put into Rune Pages, effectively giving you extra stats at the beginning of the game. Masteries, on the other hand, are free. You get one point to spend per level. A level one Summoner has 1 Mastery point, while a level 30 Summoner has 30. These can be allocated into one, two, or three Mastery trees,

The three Mastery trees.
each containing a varied amount of points. There are three trees, each one focusing on different aspects. Offensive focuses on damage, Defensive focuses on health, armor, and magic resist, and Utility focuses on gaining more experience, Cooldown Reduction (the amount of time before you can cast an abilities again), and other useful powers that don't fit in other places. A Summoner also has Summoner Spells at his or her disposal. Each time a game begins, a Summoner chooses two spells (the amount depends on what map is being played) that may be used on any champion.

The fans of League of Legends engage in many fan practices, ranging from simply playing the game to creating the whole Summoner's Rift on a Minecraft world.

A Minecraft representation of Summoner's Rift.
Other practices include cosplay, fan made music videos, and different places to find League of Legends fan art.

League of Legends has various places to find fan art. One place was the Summoner Showcase, a YouTube show run by Riot showcasing fan art. The show ran from October 10th, 2010 to September 12th, 2013. It was discontinued after episode 113. The videos would show drawn art, digital art, handcrafted works, sculptures, anything that showed talent and devotion to League of Legends. It was run by a Riot employee, known as Nikasaur.

deviantART also has a wealth of League of Legend fan art. Searching League of Legends gives over 100,000 different files, ranging from digital to photography to flash to literature. There is a lively community, collaborating on many different champions from League of Legends, creating a collection of fan art.

A piece of art found on the League of Legends Reddit page.

There is also a Reddit page, dedicated to League of Legends art and other practices. This page is run by Riot Games, and is uploaded to often. An example is available to right.

On the official page, Riot has a small corner of their site dedicated to fan art as well! Many entries here are from past contests that Riot has held, though they do have a Fan Art Gallery as well.

Another way fans of League of Legends show their love is through creating Custom Skins. In the game, each champion has a Classic Skin that is their art and model in the game, and other skins that you may purchase from Riot that you and other players see. However, some players create Custom Skins that replace the files client side, so that those with the exchanged files see whatever skins they installed. Of course, this is only client side, so nobody else (unless they've changed THEIR files as well) will see your skin. Also, whatever files were replaced, you won't ever see that skin that you replaced, you'll see your custom one. For example, if I go into my files and change Poppy's classic skin to Lollipoppy, whenever ANYONE uses Poppy's regular skin, I'll see them as Lollipoppy. However, other people without altered files will still see the regular skin.

There is a large amount of cosplayers, dressing up as every champion the game has to offer. There many entries under cosplay on deviantART, and you can find even more through a simple Google search. Users on deviantART do it to post photographs on the site, though it is common to find cosplayers at specific cons, such as PAX Prime, Dreamhack, and the Electronic Entertainment Expo (E3). A few examples can be found here.

Many people create and view League of Legend videos. Many of them are hosted on YouTube, and they are for a range of reasons. Protato Monster's channel hosts the Top Five Plays series. This series asks for people to send in their recorded videos of plays made in game, so that he can pick five each week and put them together, showcasing five of the most impressive plays out of the week. This could be an amazing comeback, a superb demonstration of skill, or just a lucky play made by accident. Jumpinthepack hosts the Top Fails of the Day, in which he, like Protato Monster, collects play from users and compiles them. However, he looks for the absolute worst plays, so that people may watch them for some comic relief.

Instalokcreates parodies of popular songs, League of Legend themed. Some videos are about the strength of certain champions, about odd uses of champions, and objectives being taken. Some of the songs are Solo Queue, a parody of Enrique Iglesias' Heart Attack, expressing frustration with playing with random players in Ranked, Bronze V, a parody of Robin Thicke's Blurred Lines, ranting about bad plays, and We Are The Supports, a parody of Lady Gaga's Applause, explaining what the support does for their team.

PlentaKill also creates parodies of songs for League of Legends, though they have some certain styles that differentiate them. Many of their songs, such as Battle Roar, a parody of Katy Perry's Roar, is about Rengar, one certain champion. Many of their songs focus on one champion's abilities and role, and what they do for the team. They also create their own original songs, such as Shadow, talking about Talon and how he can carry a team.