The Horror Big Bang was a multifandom big bang challenge focused on horror tropes. Authors had to write a minimum of 10,000 words and artists had to create a minimum of one piece of art or a fanmix.

Title: The Kick-In
Author: rise_your_dead
Artist: villiagegreen
Mixer: wtfbrain
Rating: R for character death and horror violence
Fandom: The Evil Dead Trilogy
Parts: 1/1
Word Count: 13,008
Pairing: Ash/Sheila; Ash/OC
Summary: The further adventures of Ashley J. Williams, in which our intrepid antihero becomes a bridegroom, travels back in time (again), and finds out he might just hold the key to the origin of the Necronomicon.


Title:Coil, Skin Deep
Author: dr_jasley
Mixer: sweetnovicane
Genre: Creepy psychological horror
Word Count: 12,078
Rating: R
Fandom: Bandom(Patd/MCR/mentions of TYV)
Pairing: Brendon centric. Background Spencer/Brendon that's pretty much the backbone to this whole fic.
Warnings: skewed reality, scenes that could be read as mental illness or alternate universes, ambiguous ending that some might read as character death, mentions of past imprisonment and vague allusions to past torture, slowly worsening physical illness, very mild m/m, and the death of children.
Summary: In a vaguely steampunkish world, Brendon's in hiding and hoping to find any information he can about his friends, who vanished after the education riots several years before. He's been in Shaleian for less than a year, when a rogue werewolf starts killing the local children. After that, Brendon has to help Gerard Way get his brother out of Biran Prison, the special hell devised just for those cursed with lycanthopy, using his past skills as a freedom runner for the underground movement. If that wasn't enough, he has to deal with having flashes of a place with bright white walls that he's never been to before. And eventually, it's a race between his perceptions of his failing sanity and getting Mikey out before Biran prison breaks him.


Title: Back To The Happy Camper
Author: sweetnovicane
Rating: NC-17 for gore and language
Word Count: 16,566
Fandom: Music RPF/Evil Dead II
Pairing: Gen with past Butch Walker/Michael Guy Chislett and implied Amanda Palmer/Neil Gaiman
Summary: A sequel to Cabin In The Woods. After being briefly possessed by the forces that killed his friends, Butch endures another night against them. This time, with a former friend and his own body against him. Meanwhile, the daughter of Professor Germanotta makes her way to the cabin...

Title: Under the Poisoned Tart Tree
Author: dr_jasley
Mixer: littlblackghost
Word Count: 13,000
Rating: R
Fandom: Bandom(MCR/PatD)
Pairings: Gerard-centric Gen with background Ryan/Spencer/Brendon
Warnings: unhealthy relationship between secondary characters that might contain dub-con and D/s tendancies, secondary character m/m/m, vivid imagery that some might find uncomfortable, ambiguous ending that some might consider as main character death, murder.
Summary: When Mikey gets pulled past the mirror into a fantasy world, only Gerard remembers him. That leaves just one course of action to take. Go through the mirror and bring him back. Gerard’s not expecting the complications he runs into. His brother was supposed to remember home and want to go back. However, he doesn’t and Gerard’s left with no idea how to accomplish his goal. With the help of a witch, will Gerard find his way home with his brother, or will they be stuck behind the mirror forever?


And I Kinda Like Mine
Author: Cricket/Clutzycricket
Mixer: WTFBrain
Word Count: 11,604
Fandom: Batgirl
Rating: PG-13
Summary: When Batman’s away, someone has to deal with the haunted house and its zombie army. Batgirl is not impressed, Spoiler thinks that Batgirl needs to watch more horror movies, the demonologist is uncomfortable, and the psychic is fed up. Warnings: Skirting around the idea of bondage when someone is out of it in two scenes, not for sexual purposes.


Title: The Twisted Thread
Author: kittydesade
Beta Prime: adsartha
Mixer: dragon_gypsy
Fandom: Original
Word Count: ~23,000
Rating: R
Summary: Randi wanted to be a trauma nurse because the strange things in the world just rolled off her back. The Hellhounds, the magic users, the necromancers. But one look from a biker across a library circulation line throws everything in her life out of balance. She won't believe in true love, can't believe she's doing this, but it keeps happening to her anyway. And that's just the beginning. Contains: Descriptions of violence, character death, unconventional non-/dub-con Author's Notes: Many thanks, as always, to my incredible Beta Brute Squad for cheerleading and editing work. Thanks to dragon_gypsy, who found what one of my editors has dubbed "could damn near be the theme song for Black Ice in general." More Black Ice fic can be found here.


Title: Trust
Author: disturbinglynic
Artist: rainyrocket
Fandom: Star Trek TNG - Mirrorverse
Pairing: Wesley/Riker
Rating: NC-17
Word Count: 10078
Warnings: violence, mention of past underage sex, mention of past dub-con, rimming, character death (but not our main guys), toy usage, public sex for power play purposes, attempted rape, evil boys
Summary: In a world where people don't trust anyone, Wesley trusts Will with his life. Can Will ever feel the same way about him? Can Wesley ever be more to Will than just a toy? From what Wesley has seen from Will he thinks that they could have it all, and Wesley sets out to prove to Will that he's worth keeping around.


Title: Killin Before Killin' Was Cool
Author: gala_apples
Artist: squashbee
Fandom: Bandom
Pairings: Gerard/Frank, Mikey/Pete/Alicia. Briefly mentioned Frank/Jamia.
Rating: nc17
Wordcount: 22,500
Warnings: secondary character death, pot use, mentions of offscreen alcohol abuse, graphic violence.
Summary: Gerard's not sure why the guy on the badminton team keeps trying to skewer him with a crossbow. After all, Gerard hasn't killed any of his friends, or even his host brother. But when you're in high school you don't really need a reason to kill someone, just whatever weapon is at hand, and five minutes to get the job done. At least Gerard is good at knowing when to duck. Better he get attacked than his friends. If he can just keep ducking for three years, he can graduate and live the rest of his life. Unfortunately, even those that make it out alive can never forget. After all, the past is never through with you.


Title: As Far as the World Extends
Author: ahkna
Artist: aphrodite_mine
Fandom: The Good Wife
Pairing: Alicia/Kalinda, minor Alicia/Will
Rating: R
Word Count: 10,514
Warnings: violence, major character death, sex
Summary: After the zombie apocalypse, most of Lockhart Gardner has fled Chicago and holed up in an abandoned high school in a town a few hours away.


Title: Driven Boys
Fandom: bandom
Authors: gala_apples, dr_jasley
Artist: pikasafire
Pairings: Brendon/Jon, past Jon/Cassie, Jon/OFCs
Rating: nc17
Wordcount: 37,000
Warnings: Lots of murder. Profiles that include crossdressing, unhealthy relationships, misogyny, internalised homophobia, untreated mental illness, condemnation of prostitution.
Summary: It’s normal for a band to have things they don’t tell their fans. Some bands have secret love children, some bands have addiction problems. Fans don’t want to know their swoonworthy lead singer has a wife, and they don’t want to know all four members of Panic! At The Disco are serial killers. Luckily for the fanclub, Spencer and Ryan and Brendon have no intention of letting anyone find out, and they’re able to clean up Jon’s messes fairly well. A canon compliant story of teenage killers finding themselves and promoting their band. 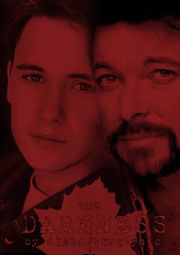 Cover art by nickygabriel for The Darkness

Title: The Darkness
Author: disturbinglynic
Artist: nickygabriel
Fandom: Star Trek TNG - AU
Pairing: Wesley/Riker
Rating: NC-17
Word Count: 10040
Warnings: non-con, violence, gore, death of OMC
Summary: A camping trip turns into a nightmare when Will and Wesley are drugged and taken captive. Both of them tortured and suffering, they manage to make it out alive, but will they ever be whole again?

Title: Welcome To Beautiful Newark
Author: littlblackghost
Artist: jokerindisguise
Band(s): My Chemical Romance, Panic! At The Disco
Pairing(s): Slight Frank/Gerard
Warnings: Death (no major characters), gore, kissing between two minors
Word Count: 14.5k
Summary: For as long as New City Village has been standing, there’s always been stories. Frank's never believed the stories, but he avoids the complex all the same. That is, until he makes a new friend from the top of the street. Frank goes against his friends and finds himself more and more attached to Gerard, until one night, something terrible happens and Frank doesn't have a clue what's going on at all.


Title: Dark Heritage
Series: Curiouser and Curiouser 1
Author: TaleWeaver
Artist: crazystineyfool
Fandom: Avengers
Rating/Warnings: this chapter - Mature / MA15+. Violence, supernatural themes, adult concepts, including a young child doing very nasty things. OC death.
Characters/Pairings: Natasha Romanoff, Clint Barton, Phil Coulson. Natasha & Clint & Phil (friendship/family), eventual Natasha/Clint, Natasha & Steve (friendship). Other character/pairings to be determined or spoilers.
Series/Story Summary: (fusion with Friday the 13th: the series) Clint Barton, freshly discharged from the Army Special Forces, isn’t sure what to do with the rest of his life. Graduate student Natasha Romanoff hasn’t been in contact with her great-uncle Ivan Petrovich in decades. The two distant cousins have never even heard of each other before they find out that they’ve inherited Ivan’s antique store. In the midst of a clear-out sale, they meet Ivan’s old acquaintance and occult scholar Phil Coulson, and make a horrifying discovery: Ivan Petrovich made a bargain with dark powers that cursed all his antiques – including the ones that Natasha and Clint have just sold. Now, Natasha, Clint and Phil must join forces and risk their lives to retrieve the antiques and put an end to Ivan’s legacy of evil magic and death.


Title: Entanglement, or The Ghost Field
Author: dracox_serdriel
Artist: containerpark
Rating: R
Fandom: Superwho (Doctor Who/Supernatural Crossover)
Genre: Horror, Action, Science Fiction, Case Fic, Crossover Fic
Word count: Approx. 41,500
Characters: Supernatural - Sam Winchester, Dean Winchester, The Tenth Doctor (Metacrisis), Rose Tyler, Pete Tyler, The Eleventh Doctor, River Song
Pairings: The Tenth Doctor/Rose Tyler Spoilers: For Supernatural, all episodes through 07x19 "Of Grave Importance"; For Doctor Who, All reboot episodes through 04x18 "The End of Time, Part 2" with some minor spoilers from 06x08 "Let's Kill Hitler"
Warnings: violence, language, horror, trauma, terror, possession, mayhem
Summary: A mauve alert attracts the attention of The Metacrisis Doctor and Rose Tyler, who investigate as UNIT and Torchwood employees. The Winchesters get a call from a woman who claims her doppelganger has just died in the Trine, an area of rural Florida with so many ghost stories and odd phenomenon that people named it after the Bermuda Triangle. What they think is just a basic shifter/spirit problem turns out to be an entire world of horrors.