Harry Potter and the Psychic Serpent

Harry Potter and the Psychic Serpent is a het Harry Potter novel in two volumes by B.L. Purdom. The first volume has 186 pages, the second one has 189 pages, for a total page count of 375.

The ships are Harry/Ginny and Ron/Hermione. It is a fifth year fic and part of a series that spans Harry's sixth and seventh year as well. 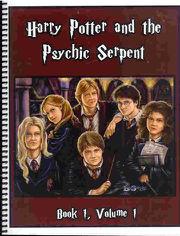 The Author Looks Back

At any rate, in observance of the tenth anniversary of the first fic, starting on the day I began posting it in 2001 (somewhere around the third week of May--I'll check the exact date before I begin), I'll post about what I posted on that day on the day I originally posted it. Sort of an annotated version of the fic without putting in footnotes or scribbles in the margins. Now, I expect to be doing a fair bit of face-palming during this process. When I was interviewed about the trilogy by the Potterfic Weekly folks last year I replied perfectly honestly, "Yeah, when I reread some of the early chapters I do wonder now, 'What was I thinking?' about some things." I'm the last person to believe anything I've written is sacrosanct. That was part of what made it such a valuable learning experience for me. And now I can look back and laugh and marvel at what an innocent I was. (Oh my GOD, chapter five. CHAPTER FIVE. WHAT WAS I THINKING?)... [3]

About Its History with Agent With Style

This series of zines has a complicated history with its one-time publisher, Agent With Style. See: Blueprint(s) for Disaster - The Saga of Me and Agent with Style (AWS), Archived version, accessed 5.11.2011 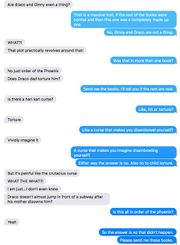 In 2017, Shelly Zhang posted at twitter: "Friend is reading Harry Potter for the first time. He suddenly realizes he's read a fanfiction Order of the Phoenix instead of the real one."[4] -- excerpt from text exchange

In 2005, a fan compared the original Harry Potter series by J.K. Rowling, the fanfiction The Draco Trilogy (by Cassandra Claire), and "Harry Potter and the Psychic Serpent" fanfiction series:

I've long been a fan of Barb Purdom's psychic serpent series, and a friend just recommended to me the cassandra's draco series. So I downloaded them all last Sunday and blasted through them in the space of a week. I'm just curious how many people on this board have read both fics, and what they think of them comparatively. As far as I can tell they are the two most popular Harry Potter fanfics. Anyway, I figured I'd give my impressions both as a first time reader and as a fan of the other series.

The first thing is of course that I could not put the stories down. I absolutely had to continue reading them until I finished them (I was the same for the Psychic serpent series and for the cannon books so no difference there). However, it was more a desperate desire to see what happened next rather than the fact that I was actually enjoying what I was reading so much. Several things made the draco series both somewhat tedious as well as riveting.

Where plot is concerned it is somewhat of a mix, both when it comes to relationships and as far as main story. Relationships are generally well examined once they are begun. Draco's relationship with Harry is by far the best non-romantic relationship I have ever read, well developed, intriguing, and real. In truth, it is the main point of the latter two stories. Harry's relationship with Hermione is done fairly well, and Draco's relationship with Ginny is suitably complex. However, the starting points of these relationship are rather vague and unbeleivable, especially Harry and Hermione. After all, they are supposed to be the main romantic relationship, and they are in love long before the story begans, with little or no explaination why (and what explanation there is blatantly contradicts everything in canon). Why they are in love, and how they came to be in love, is extremely confusing, especially from Harry's perspective. Draco and Ginny is a little easier to see the developement. The beginning of Harry and Draco's friendship is also a bit confusing. The physical aspects to the relationships (or lack thereoff) are handled well throughout. Truth be told, Barb does romantic relationships far better. All the relationships by the end feel extremely real and right, and the various developements pluck at the heartstrings in all the right ways. (Though the sex in Barb's series is a bit overdone in the first book). I challenge anyone to find a more moving relationship than Harry and Ginny in Time of Good Intentions (also, btw, the only book ever that has made me nearly cry).

As far as main story plot is concerned, it goes from conherent but simple (Draco Dormiens) to unneccarily twisted but nonetheless riveting and well done (Draco Sinister {There at least four story arcs that were completely irrelevant and should have been cut out}) to somewhat drawn out but nonetheless clear, well developed, and interesting (Draco Veritas). Certainly the what's gonna happen next effect is extremely well done, far more so than almost any other books ive ever read. The sixth month wait time must be killer, though I have just begun to experience it. Barb was a lot better at turning out material faster, but her cliffhangers tended to annoy the hell out of you during the wait. The one big plothole I noticed though is that how in the hell does everyone seem to know that harry is the one to kill voldemort? No prophecies are given, and no reason to suspect this either, yet everyone from dumbledore to harry himself seems to know that it's his job and his alone.

As far as characters are concerned, the developement and realism is generally excellent though often out of character. Draco is of course wildly out of character (despite all the fanfiction authors out there, Draco was clearly, even after only the fourth book, an git with no redeaming qualities whatsoever, with no chance of redemption or change, and with no complexity either, just a simple evil foil for Harry. People just took the mysterious bishounen thing/crush on Tom Felton and ran with it}). Nonetheless, both Barb and Cassandra have taken a simple character and made him their own, and Cassandra's version is extremely well developed and vivid (as he should be, being the main character). We feel is ups and downs, his confusion, his pain. A bit too angsty but nonetheless far more well done than JKR's fifth book Harry (whom by the end I wanted wring his whiny little neck) and Barb's Draco (who is also complex but a lot less developed). On the other hand though, I think Cassandra's Harry is the best character of all, managing to make him human and fallible and at the same time the character we all identify with. It is perhaps the most natural and real developement I've seen of JKR's fourth book Harry including JKR's own developement. His developement as a hero oddly enough makes him more real than ever, and if there was ever a character you wanted more to succeed, I haven't found him. Ginny is also well done, by far the most interesting female character in the series. Hermione is a bit out of character, she seems to have lost her bossy self by the beginning of DD, and never really comes into her own except that everyone seems to be in love with for reasons that are described (vitality etc.) but that she never seems to actually exhibit. Ron recedes to the backround and becomes nearly irrelevant, and the attempt to make him relevant at the end of DV is contrived. Dumbledore also seems to have become irrelevant and fades back as an imporant character. Same with Sirius and Lupin. The vilians are well done, Voldemort and Slytherin are both suitably evil though in satisfying different ways. The complete discarding of Voldemort in DS was a bit jarring though. On a side note, I'm glad she didn't succumb to the temptation to make Harry and Draco super muscular (ala Barb) but the Draco as a sex god thing is a bit annoying.

Well that's all for now, and in final judgement I still have to say the nod goes to Barb's psychic serpent series, mostly because what she wrote comes together as a coherent whole, a true trilogy of three books. When you finish everything is clear yet complex, whereas the Draco series is a bit muddy and vague (and not in a good, complex literature way but in a poor writing kind of way) and I doubt finishing the series will change that. The draco series reads like a bunch of connected short stories squashed together, rather than a coherent whole. And Barb's writing style is far superior, and in the end that trumps the perhaps superior individual characteristics, because it helps define in what truly makes a better book: I just had more fun reading it. Sorry. I'd love to see what you guys think, and please other people read the pyschic serpent series, compare them, and tell me what you think. [5]