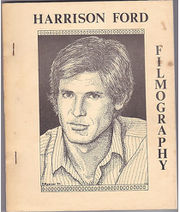 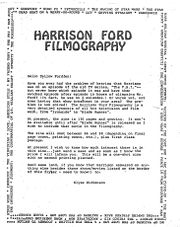 an ad printed in Rogue's Gallery #4

Harrison Ford Filmography is a zine that contains information about Harrison Ford's movies and TV appearances up through Blade Runner in 1982, compiled by Elyse Dickenson.

It contains 74 pages and synopsis and list of credits for each show and movie. The cover was by popular Star Wars fan artist by Martynn.

The original ad said it was "130 pages and growing," which means the creator must have used a different font or format when the zine was finally published.

Have you ever had the problem of hearing that Harrison was on an episode of the old TV series, "The — but never knew which episode it was and have then watched episode after episode in hopes of glimpsing Mr. Ford? (In fact, he was on 2 episodes.) Or worse yet, not even having that show broadcast in your area? The problem is now solved! The Harrison Ford Filmogranhy is a very detailed synopsis of all his television and film work, from "Ironside" to "Blade Runner."

At present, the zine is 130 pages and growing. It won't be available until after "Blade Runner" is released as I wish to include that movie in the filmography.

I think an editor who does a compendium like this one deserves a lot more praise than your average zine editor. A lot of us like to have these kinds of facts, but let's face it, it's a dull, time-consuming, detail-oriented job, and few people want to do it. Elyse Dickenson has done this kind of fact-gathering for Harrison Ford fans, and what's more, she's done it very well. The Filmography is a bibliography of all the Harrison Ford roles. You want to know what character Harry played in Journey to Shiloh? It's here. You want to know what year The Possessed was filmed? That's here, too. As are hundreds of other facts that no one but the most dedicated Ford-atic could quote from the top of her bedazzled head. This hefty little volume is divided into sections: Stage, TV Shows, TV Specials, Made for TV Movies, Feature Films, each section divided by a blue sheet that makes individual parts of the zine easy to refer to. Not only does Elyse list year and credits under each program or film, but she provides quite a detailed and usually, entertaining, synopsis of each. The synopsis of Blade Runner, for instance, runs nine pages. I don't expect to do anything more than leaf through a zine like this, but Elyse's synopsis-style makes the Filmography an entertaining volume in its own right. The detailed credits are a bonus, too. She doesn't just list Harrison's character, but gives all the credits for each film, which is a bonus when you're looking for that niggling little fact that keeps escaping you. Perhaps the best part of the Filmography is the listing of TV shows and made-for-TV movies. Perhaps I'm an atypical Harrison fan, but I confess myself a little vague on the details of all the minor roles Harrison played in the past, so it's nice to have a reference on hand when I'm considering whether to watch an old "Kung Fu" or "Gunsmoke." The printing is impressive. Seldom have I seen such a crisp piece of offset printing in a zine. Perhaps Elyse should share her secret with fandom on the whole, for the sake of all our eyes. My only quibble here is the inadequate stapling ... the back cover fell off my copy with very little handling. The cover, incidentally, is a bonus in itself--an absolutely charming one of Harrison by Martynn, one of her best pieces, too. It's a nice-and very appropriate-preview of the zine's well-researched contents. [1]

I've seen a copy of Elyse Dickenson's filmography. She has put 5 years of timeless effort into this wonderful work and no matter what she charges, it will be worth much more to any Harrison Ford fan. Let her know as soon as possible if you have any info for her on it, and if you are interested in purchasing it. She told me that even Harrison's agency didn't know all the parts Harrison has done, but she has a very extensive list right now, and it's still growing. You won't want to miss this publication. [2]