Gru's Plan is a four panel internet meme usually showing the character Gru from Despicable Me standing in front of a blank easel, creators can add whatever text they like to the blank space. In the first three panels Gru looks excited about what is printed on the easel, but in the last panel he looks confused or upset about what is written. This meme first appeared around early to mid March 2018, and quickly became popular on sites like Tumblr and Twitter. Fans used the meme to humorously depict their fandoms and make fun of themselves. 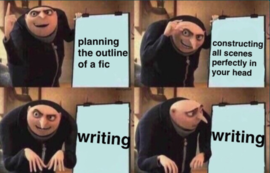 Example of Gru's Plan meme, used to illustrate the difficulty of writing fanfiction