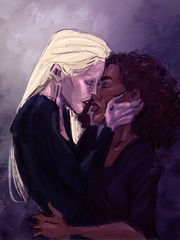 Fanart, Archived version based on Glass Silence by marrymehesterharper on tumblr

Glass Silence is a novel-length femslash fanfiction in the Harry Potter fandom. The work is particularly notable for featuring Hermione Granger in relationships with each of the Black family sisters, Andromeda Tonks, Narcissa Malfoy, and Bellatrix Black in succession. The work does not feature polyamory or an incestuous relationship between the sisters. Bellatrix/Hermione is the endgame relationship.

The work has an unusual premise, with the author acknowledging that it started as a joke.[1] An orphaned Hermione Granger is sent to a muggle orphanage, and then quickly moved to an adoptive wizarding home. Her adoptive parents are too poor to send her to Hogwarts, leaving her to pick up what magical education she can in her sparse free time. As such, Hermione never forms a friendship with Ron Weasley or Harry Potter and is on the sidelines of most major events in the Wizarding World. However, an overwhelmed Andromeda offers her a job in the Black Manor, which has the former Death Eater Bellatrix Black under house arrest on the top floor.

The fanfiction reached a fairly large audience with over 1000 reviews on fanfiction.net and over 1200 kudos on Archive of Our Own. The author also posted two shorter companion works, When Promised With Ice, a 6k+ word fic focused on the Hermione/Narcissa relationship; and Spinning Dust in an Untidy Dark, an 11k+ word fic intended to tie up loose ends.

[Kitty Murking on fanfiction.net] "I love it. You have given me my Hermione in a Black-cest sandwich on a shiny silver platter. I would like to see all different ways you can put them together, in pairs, trios and more. I loved your rating note aswell. I am looking forward to more and when I log in to my account proper I think I am going to favorite this story. I hope that my review is just one more reason to put effort into this work."[2]

[etain-lives on fanfiction.net] "Dear Zarrene,
I logged in just to comment. You don't understand (and I'm certain many others would agree) just how much this story being updated, made my fanfic day!

Ever since day one, this story has given me chills. Delicious dark, sensual, mysterious- chills. I don't know about Hermione, but I think I wouldn't have been able to remain a chaste lady surrounded by such beautiful and intense women. Especially if I had to live with them for a period of time!

I like your characterization of Andromeda a lot, especially the way you phrase her dialogue. Though she is supposed to be the "kinder" sister, from her choice of wording, it's obvious she seems to have it all planned out and having Hermione (be it her mind, body, or both) is the end goal...

This may sound a bit weird, but the whole time I'm reading this, I kept finding myself thinking,

"Whoa...Poor little Hermione is going to lose her innocence in more ways then one!"

Honestly...Reading your writing, I feel as if I'm indulging myself on a piece of decadent dark silky chocolate. You know how addictive chocolate is don't you?

Well, you can see that you've made me an addict. Can't wait to read what's next. Even if it takes a while to get there again- I'm game!"[2]

"40% through Glass Silence now and I love this Narcissa too.

I knew going into it that Cissamione wasn’t endgame, but now I’m afraid it’s gonna destroy me."[3]

[Ramabear (RyMagnatar) on AO3] "Right, i want to preface this comment with the fact that i dont read a lot of hp fic rn and i sorta stumbled across this fic via some blog's post of the three black sisters that had linked this fic as the reason for the artist to make hp fanart, so of course i clicked through (as one does) to see if the fic was what i'd be interested in and i think it just might! honestly i need a little something longish to read this weekend after the crazy week i've had and i really do love AU twists on canon and i haven't read anything good about Hermione in a while and the Black sisters are perhaps some of my most favorite hp characters

ANYWAY all that is just to say that hello thank you for writing this, im really looking forward to reading this! i appreciate the quick set up of "here's how things are for this world's Hermione!". its a bit tell-not-show but you did it in a really clear way and an interesting way too! i like that kind of narrative play, its great. and i do like how this world 'feels' with the post-war craziness and the thread of tension through the whole thing. its very good.


I like Andromeda's perspective so far, she's written in such a lovely way and her needs are both clear and feel perfectly real. of course she needs someone to help keep her a bit sane in such a house as she's described! I can't wait to see the introduction of the other women and see how everything plays out.[4]

[fortunaflying on fanfiction.net] "I have quite the list of things I need to say in this review, but I'll break tradition and begin with the end: the last chapter of this story made me cry. Twice. It was so beautiful and raw and gratifying all at the same time. I often feel that authors make the mistake of closing things up too quickly, leaving loose ends hanging and plot holes gaping, or sometimes it's just very dissatisfying, for lack of a better word. With this story, I loved the ending particularly because it did not in any way feel rushed or hurried. We got closure, the characters got closure- I don't believe in 'perfect', but I have to say that this was pretty darn close. Needless to say, I adored this. I honestly have so much respect for you as a writer, for a sizable number of reasons. You somehow got me incredibly invested in the relationships between Hermione and the other Black sisters, even though I don't ship Andromeda/Hermione and I barely ship Cissamione. First with Andromeda and Hermione- I thought they were so perfect together. Andromeda was an amazing teacher, Hermione felt safe with her, and she seemed the most reliable of the three sisters. Then Narcissa and Hermione- god, their relationship was just breathtaking. Every moment that they were together was exotic and exciting and so passionate. Each time, I kept thinking that there was no way I was going to be able to enjoy the next ship in line because each once was just TOO well-written, but each and every time I found myself loving the new pairing more than the last. Anyways, I'm convinced you're magical. Moving on-

I'm also dying at the fact that you used THREE SEPARATE TROPES in this fic, one for each Hermione/sister pairing: teacher/student, Fake Relationship, and whatever Bellatrix and Hermione had. I don't even have a name for it at this point. Now that I think about it, you probably used countless others that my simple Muggle mind just couldn't pick up on.

Jokes aside, this is amazing. There were almost no spelling/grammar errors, it was well-paced, and the way you used literary devices and the like didn't break up the flow of the story at all- on the contrary; it contributed to the plot and the overall effect it had. Your use of magic as a plot device was very creative- I'd say you've done J. K. Rowling more than proud. I think, more than anything, the reason why I love this fic so much might be that you made very clear the differences between each of the sisters' relationship with Hermione. It didn't feel repetitive, it felt new each time, and I really appreciate that you took the time to do that. Speaking of taking the time to do stuff- this story is 42 chapters, 290,840 words, and took you 5 and a half fucking years. If ANYONE can manage to be unimpressed with that, I will print out this fic onto paper and smack them with the solid stack of paper I would end up with. Also, another thing I love- you didn't overdo the sex- you sort of let it come into play where it was needed and where it would be relevant to the story. I know I couldn't write smut like this if my life depended on it, so once again I praise you and your holy talent."[5]

A low-resolution version of "Give me back MY MAGIC!" by pocketsfullofart.

There are a handful of tumblr text memes referencing Glass Silence, for example:

Andromeda: *is incredibly nice to her, teaches her magic, falls in love with her*

Narcissa: *takes her seriously, treats her as a peer, never lies or deceives her in her any way, shape or form*

Bellatrix: *tries to kill her or otherwise get rid of her multiple times*

This particular post has over 800 notes on tumblr. Other examples include incorrect quotes memes:

[Glass Silence in a nutshell]

Narcisa: This is Hermione. Hermione is our… actually, she's our hostage.

Hermione: I like to think of myself more as a “guestage”.[7]

Bellatrix: We CaN cHaNgE tHaT iF yOu WaNt :D.[8]