The Gallifrey Awards are Doctor Who Fan Video awards for vids featuring the Ninth and Tenth Doctor. The awards were born of an idea jagwriter78 and rhoboat had trying to compare categories to the Farscape Shelly Awards, which phoenix has been running since 2005. Winners receive a customized graphic.

Blink› Vids under 3 minutes in length, not including credits or intro/exit clips › Mutually exclusive from Time Crash 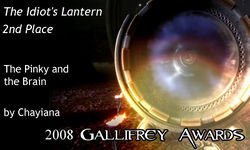 example of a winner's graphic from 2008

The End of the World › Theme: Drama › Mutually exclusive from The Idiot's Lantern

The Shakespeare Code › Best vidder for 2007

While vids were nominated in 2009 and some voting took place, it is not clear is any winners were announced.