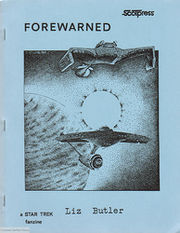 Forewarned is a 52-page gen novel by Liz Butler. It was edited by Sheila Clark & Valerie Piacentini and illustrated by Ann Humphrey.

From a publisher's ad in Universal Translator #15: "Spock contracts a mutated children's disease and dies, causing Kirk to threaten mutiny. Fact -- or forewarning?"

Anyone having read Karen Hayden's zine 'One Last Wish Fulfilled' will, no doubt, notice certain 'similarities' in the first half of this story.

I freely admit that my story was written as a direct result of reading Karen's zine. I agree that a 'death' story does give enormous scope for bringing people's deepest emotions to the surface. On the other hand, I personally find the death of a well-loved character extremely distressing.

Karen's story gave me an idea for a story of my own, whereby I could utilise the death theme to the full, without anyone actually dying.

When Liz first submitted her story to us, we did feel slightly dubious about printing it because of the source of her inspiration. However, we very carefully checked Liz's story and Karen's against each other, and decided that although there are similarities, the differences were great enough that we could accept it? we have never subscribed to the view that because one person has written a story on a certain theme, nobody else should ever try to develop that theme. There are, after all, very few basic themes in fiction anyway, The important thing, we believe, is the ultimate development of the story, and the 'taste' it leaves in the reader's mind. In some ways, zine writing is a very incestuous pursuit; I doubt that there are many fan writers who have not, at some time, taken inspiration from another story. And in a way it's quite a compliment to have produced something that another writer feels strongly enough about to produce his/her own story as a result.

Spock gets to be Spock-dead again. Actually, this was pretty well done catharsis; well-written exploration of how the characters handle separation. A bit much with the 'bond that not even death can break...' stuff, but what the heck. All the major players (including Spock) share a dream in which Spock dies as a result of exposure to a mutated flu-like virus on Almiridian. When Enterprise is then ordered to survey said planet, they discover the nightmare to be a type of Romulan telepathic warning buoy. Nasty Klingons get theirs by ignoring the warning. [1]

Great, this starts out as a Spock Death story, suddenly you find it's all a nightmare. But it's so REAL! Then the nightmare becomes reality. Liz explains in her forward about her inspiration. She follows it up with a real situation keeping you interested until the end. Well written and by keeping your interest until the end, the story can be enjoyed to the fullest - a far cry from recent offerings on the fanzine lists. [2]