Forever Net is a Forever Knight gen fanzine containing stories that were posted to the ForKNI-L and FKFIC-L lists and collected by Valery King and Karin Welss.

For example, there's this series about this Canadian vampire cop. And it's shown in Canada and the USA. And people from Canada and the USA get to talk to one another about it via computer bulletin board systems. And on one of these systems in particular, somebody put together a listing where conversation could be exchanged and another where stories (including fragments and ideas) could be posted and downloaded by other computer users. Immediate communication, connection, reaction (no waiting for LOCs that never come or reviews from *AHEM* people to whom they can't respond), and gratification (to readers who spend their dollars on download time and computer paper and ink cartridges-no waiting for a zine to arrive by mail when the stories are THERE to be read).

But somebody-Valery King-started wondering what to do about the people who'd like to read the fiction that was posted, but didn't know about the net, or know people who had access to the net. And, her little hands itchin' to get at typos, Valery got permission from the writers to place their completed (and edited) works into a proper zine format, where it would be available for all the non-computing world to see.

There's no artwork. The layout is clean, in a very modernist "no frills, but nice choices of type can be pretty, too" way. There's a good introduction about how the zine came to be, how the Internet list came to be, and an example of how a brief bit of on-line humor can lead to fragments or entire stories. In fact, it's a continuation of one world (Forever Knight, which it's assumed you've seen, or at least whose premise you understand) and an introduction to another (the FORKNI-L and FKFIC-L listings on Internet).

The quality of the fiction is well above and beyond the fannish average. From "Old Blood," by Veronica McKnight (in which Nick is vetted by a protector of his partner's family), to a brief interlude like "Kindred," by Lynne Levine, to a rip-roaring "my vampire's back and there's gonna be trouble" story like "Of the Blood" by Margaret Newman. The historical pieces, when done, are done well (as in "Say Goodbye to the Light" by Karin Weiss) and the hysterical pieces, such as Don Bassingthwaite's "Dairy Blossoms" are well worth the time and trouble of any good shaggy-bat story.

My favorite two pieces would have to be "Sidney Meets Janette" by Dionne E. Nelson (in which Natalie's cat give a running POV dialogue about a vampiric visit to her human's apartment), and "Nectur du Natalie: the Forbidden Wine of Dreams," by Marian Gibbons. The latter is a particularly well-drawn story in which one discovers that there are certain advantages to having a vampire for a friend (and possible significant something-other), especially when you're dying of a terminal disease.

I suppose the amazing things about Forever Net are that the fiction is sooooo good (Valery having deftly culled the best from a good batch of fiction-I never stumbled once over grammar, dialogue, motivation, or setting) and that it was done so quickly (the immediacy of downloading computer compatible fiction with instant access to editorial requests). The price is a bit high ($20.00 for two hundred pages, first class), especially since there's no special priming needed for artwork. But I suppose all that immediate access does cost something more than two weeks and a twenty-nine cent stamp....

Is this the face of future zines? Possibly. I wouldn't count on every net-induced zine to come up with this quality material or presentation. But for now, it's good stuff.

So why am I going through art-withdrawal? [1] 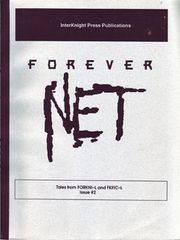 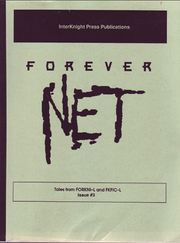 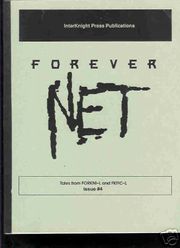 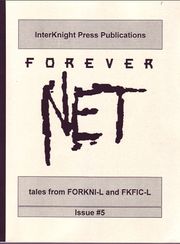 Forever Net Special Issue 1 is subtitled, "Special Holiday Issue" and "Forever Net Before Christmas." It was published in 1994 and contains 140 pages. The story, "Angel Crossing", was nominated for a 1995 FanQ. 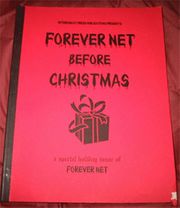 Forever Not Stories: Don't Call Me Buffy (Marian Gibbons). The Evening After and Choices (both by Sharon Himmanen). Hose Were the Nights, My Friend (Celeste Hotaling-Lyons). Domestic Tranquility (Jill Kirby). Deuces Wild, or To Have One's Cake and Eat It, Too (Lisa McDavid). Fatherhood (Margaret Newman). Ne M'Oubliez Pas (M.E. Orive). Valentine From Another Planet (Pamela Rush). More.

Snakebits (Variations on a Scale): Water, Water; Over Boa-ed; The Barest Slip Twixt Fang and Lip; Getting it Straight (all four by Susan Garrett). The Cure (Sandra Gray). A Share of Darkness (Robin Carroll-Mann). More.