Florida Fandom is a multimedia non-fiction zine edited by Rich and Ruth Coy. 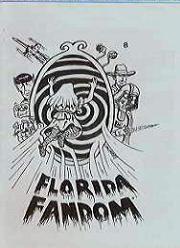 cover of issue #8 (first series), other cover art in gallery

Florida Fandom has been around since 1976 as a Fanzine. We have stayed with the times as well as we could. When we started we woudl [sic] type up articles on an electric typewriter and then cut and pasted them together, using rubber cement, making the zine, and adding press type for the title and pasting on the original artwork. We would then take the paste up to a printer and have it printed off-set. We latter [sic] moved to a computer to type it up on, but we still had to cut and paste to put it together and instead of orignal artwork, we could use photo copies of the artwork. Titles could also be made with the computer. At about this time we changed form off-set printing to the then much cheaper photocopies. (They had dropped from over 25¢ for a one side fuzzy copy to about 7¢ for a two sided sharp copy). Computers and their programs got better and we were able to put together the entire issue on the computer. And in 1996 we went the next step - an online version. Our hopes were for an ever growing site - keeping the orginal departments from teh [sic] zine and adding a few more. We are updating this in April 2011 almost 35 years after Florida Fandom started. October will mark 35 years since issue #1 cmae out (we had an issue zero come out in August of 1996). This is part of a year long celebration of our 35th year...with a new print issue coming out in October, the first in almost 15 years. We are revamping the website, more than once so far. And we now have a Facebook Page."

"Now a little bit about Florida Fandom and how it started. Back in 1976 Ruth and I wanted to start a Florida based fanzine being both for and about Florida fans. Having been introduced to Fanzines by John Ellis (of Star Trek Federation of Fans) adn [sic] having co-editied [sic] with John many fo teh [sic] STFF newszine Tholian Registry, I was ready to start. After a few issue we realized that the zine was for more than just Florida fans, as we had readers and contaaributers [sic] form [sic] all over the country. Most copies were giben [sic] away free in exchange for other zines, artwork and articles. This was sort of an early version of the internet except we depended on snail mail to stay in touch. [1]

Florida Fandom 1 was published in October 1976 and contains 9 pages.

Florida Fandom 2 was published in April 1977 and contains ten pages.

Florida Fandom 3 was published in July 1977 and contains fourteen pages.

Florida Fandom 4 was published in September 1977 and contains fourteen pages. 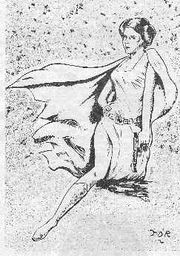 Florida Fandom 5 was published in July 1978 and contains about fourteen pages.

Florida Fandom 6 was published in April 1979 and contains 16 pages.

Florida Fandom 5 (new series) was published in 1988 and contains 16 pages.

This special issue is about female comic book heroines.

This special issue is about female comic book heroines. It is subtitled, "Return of the Supergirls."