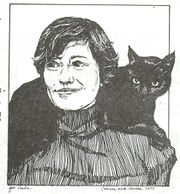 Connie's self-portrait (along with Harold) for "Featured Fen -- The Visionary: Connie Faddis."

Featured Fen -- The Visionary: Connie Faddis is an autobiographical interview printed in Menagerie #12.

In it, Connie talks about her interest in science fiction, the complicated dance of Star Trek and SF fandom, her zine Interphase, and her art.

Science fiction is for dreamers, I'm told. Someone had me pegged when they handed me "A Canticle for Leibowitz" in 10th grade and said, "You'll love it." Well, it wasn't love, exactly. Fascination, though. Like many people, my realities at that age were unpleasant, and "escape" was the watchword, even if it was merely escape-by-proxy. Sf offered a lot of that. So did "The Man from UNCLE," James Bond, and other lazy- persons' media fantasies, and those were part of me then, too.

Star Trek premiered in my first year of college at Carnegie-Mellon University. Not only was it ready-made escape of the form I'd grown to like, it offered a unique attitude toward the future that was notably lacking in science fiction literature: optimism.

I went into sf fandom be cause it was an engrossing and creative subculture, but found my interests and fannish friend ships drifting toward the more genial Trek fans within sf fan dom. At that time, Trekdom was an affectionately tolerated subset of sf fandom (about 1969 to 71).

Two early hybrid fans I met were zine editors Ruth Berman of T-NEGATIVE and Devra Langsam of SPOCKANALIA. Devra seemed to like my artwork, nutty person. My drawings were pretty pathetic in those days, but Trek fandom was fairly small, artists were rare, and being an impoverished student then, I found that zine editors would give me free copies (!) of their treasures for a few scrawled penlines. Ruth, too, seemed to like what I was doing, and worked with me on my first honest attempts at story-telling.

Around 1971, my interest began to wane. In addition, "Trekkie" was becoming a dirty word in sf fandom. I gafiated from Trekdom and started to become a reasonably acceptable fan artist in sf fanzines. Other fantasy worlds took Trek's place. But Ruth Berman kept sending me free copies of T-NEGATIVE anyway, even when they didn't contain anything I'd contributed.

When Trek-in-syndication came back, about 1973 in Pittsburgh, I watched it again with vague interest. I went to the 1973 SF World Con in Toronto and met Ruth, Bjo Trimble and other Trek die-hards. And there were new Trek fanzines, plus the first episode of the animated Trek. By the time I left Toronto, I (1) had a bellyfull of the intolerant attitude of sf fans toward Trekfen, and (2) had become enthused about Trek again.

Paula Smith had asked me why I both write and draw--as though one medium weren't enough. That about says it. My imagination seems to work in several modes. One is the visual tableau mode: I find a visual image in my mind, composed of place (I'm very moved by the moods of places) and person(s). Thesegetturned into drawings, often like the Fantasia art I've done in INTERPHASE, and have no particular story to go with them. Rather, they are germinal stories, frescoes lifted from the inside of my head. The other mode in which I fantasize most often is less serendipity and more drive. It moves like a film-strip in my mind, actors on a stage with some important (to me) statement to act out. The themes I write have very person al beginnings, and a lot of personal images and symbols. I look back over the five years of Trek fiction I've written and trace the places my mind traveled (the drug scene, psychotherapy, people's lib, private joys and betrayals, and so on) on its journey to where I am now and where I'm going next. Sometimes it's frightening; some times it's downright reassuring.

INTERPHASE came out of "visions" too. There were few zines in 1974 that gave noticeabie attention to graphics, layout, or strong dark artwork of the kind I'm often moved to do. There was very little literary experimentation (stylistic or thematic) going on, either. An offset, graphics-oriented zine with a taste towards freshness seemed a reasonable goal. Co-editorship of ENERGIZE! with Candy Silver fell through, so I began INTERPHASE. Today, there are a lot of fine zines printing good artwork, poetry and fiction. I feel comfortable, now, retiring INTERPHASE and reverting to the role of contributor. In a way, I've come full circle, still eager for another round.