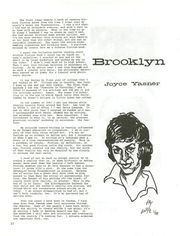 from the print zine, illo of Joyce by Pat O'Neill

In it, Joyce talks about her interest in science fiction literature, literature in general, and in Star Trek.

It was during my first year of college that I got hooked on ST. College was in Oneonta, New York; I knew no one and was very lonely. The first Trek episode I saw was "Tomorrow Is Yesterday," and I liked it because of its attitude and the way it put its attitude across: humor. The scene I'm referring to is the one in which Spock tells John Christopher he doesn't believe in little green men either.

In the summer of 1967 I met Lee Smoire while chasing Leonard Nimoy around New York. Lee took me to NYCon 3, and at NYCon 3 I met Devra Langsam. It was at this point that I entered sf fandom as a neo. I corresponded with Devra, showed her my writing, and attended cons with her. More important, I was introduced to what is, in my opinion, the greatest practical writers' workshop in existence: the fanzine.

My attitude toward writing is heavily influenced by my formal education in literature. I am in pursuit of that holy thing called art. I'm not so foolish as to attempt to define art, but I recognize it when I see it. In writing it's achieved when a story is a true representation of reality. This is a paradox, of course. Fiction, by definition, is a lie, but good fiction tells the truth. Put another way, fiction created its own reality, but the worth of that reality may only be measured by how closely it mirrors the real world.

I read sf not so much to escape reality as to create a reality that is, in some difficult to define sense, more real than the reality I left behind. Fiction enables you to do this because it has a structure; it gives life a plot. At the same time the danger of being disappointed is greater. Because the sf writer has a great deal more room to play around in than does the writer of conventional fiction, the danger of his getting off the track, of losing touch with reality, is greater. This is why bad sf is so funny; the discrepancies between the real world and the author's reality are glaring, and things which are incongruous always strike us as funny. I am always disappointed in bad sf, but I can't help laughing, too. It's my perverse way of getting even. Over the years I have been in fandom, I have seen Star Trek fandom come into existence through the Febcons. Some of the people I know have developed the ability to create worlds I can enjoy; it's an ability I hope to develop myself one day. In the meantime I will edit and criticize and eventually find the reality I'm looking for. I believe midwives are important folk, too.