Fangirl is a 2013 novel by Rainbow Rowell about two young American girl twins who are BNFs in her fictional Simon Snow series fandom. 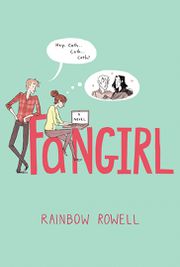 Cover image of Fangirl novel, with art by ND Stevenson

Rowell is herself a fangirl, writing about her deep fannishness about The Borrowers book series and is currently. Star Wars fan.

Cath and Wren are twins who, while growing up, found comfort in the Simon Snow fandom after their mother left them. As they start college during the book, Wren is trying to grow away from fandom and Cath to let go after Simon Snow got her through those rough times. Cath, the protagonist, is a Simon/Baz-shipping BNF who is writing a Simon Snow fanfic while anticipating the final Simon Snow book by author Gemma T. Leslie (GTL). At college, Cath deals with social anxiety, distance from her sister, and a professor who believes that all fanfiction is plagiarism.

The story focuses at first on Cath's anxiety and struggles to maintain her fannish lifestyle in the face of her roommate Regan's ever-present boyfriend Levi, who seems to have feelings for her. She also deals with Wren discovering alcohol and clubbing, and is hurt when her sister makes fun of Simon/Baz one night. Their father's emotional breakdown only adds to the stress pile, as does Wren developing alcohol poisoning and a surprise visit from their mother, whom Cath still deeply resents for leaving them.

Eventually, Cath manages to sort out her feelings and find life away from her laptop, while still maintaining her identity as a fan. Levi takes an interest in her fanfiction and asks her to read it to him, Regan gives them her blessing to start dating after admitting to Cath she and Levi broke up some time ago, and Cath makes amends with her sister, who rekindles her own love of Simon Snow.

Rowell later wrote the Carry On series, which is her own version of the Simon Snow series, featuring a canonical Simon/Baz relationship. While there are some fanworks exclusively based on Fangirl, these are massively outnumbered by those focused on Carry On.

In 2020, the first of a four-volume manga version of Fangirl was released. This prompted some fans from the Carry On fandom to create fanart in the style of the manga, rather than in their usual style.

Cake Evangelista wrote a very positive review in the Philippine Daily Inquirer[1], saying, "“Fangirl” beautifully captures my own sentiments about being a fan. Its story will resonate with people who have ever loved a piece of pop culture to the point of distraction." A lot of the book's fans find Cath relatable, especially those who suffered social anxiety and needed to overcome it.

Alyssa Rosenberg was more critical, saying "Fandom deserves a novel that doesn’t treat it like a pale substitute for life, when fan communities can be such a major component of it." [2]

A third interpretation can be the message of balance: Cath using fandom to avoid life is treated as unhealthy, but she shows no signs of giving it up forever once she comes out of her shell. In addition, the beginning of the book mentions the pressure she feels as a BNF and how finishing her magnum opus within a certain time period feels like a chore rather than a pleasure. Cath's sister also still reads Cath's fic and begins to beta the story for her, and the book ends with Cath and her friends showing up in cosplay to see the final movie. 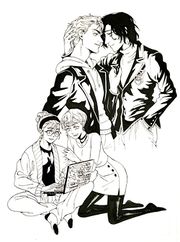 Art by Carry On fan KrisRix based off the 2020 Fangirl manga, showing Cath, Wren, and Simon/Baz, 2020

Fanworks for Fangirl are split into two types, although both share the same tag on AO3:

The latter (Simon Snow-related works) has always been far more popular than the Fangirl-related works, even before the release of Carry On. For example, on AO3 the number of Fangirl-era Simon/Baz fics outnumbers Cath/Levi fics by around 5:1 (although it should be noted that some are mistagged and are actually Carry On works, and some Fangirl-era Simon Snow works may have been subsumed into the Simon Snow and Related Fandoms tag).

Fangirl was a Yuletide fandom up until 2018.

The relatively small amount of fic tends to focus on Cath's relationship with Levi and fandom. A lot is fluffy.

Rainbow Rowell's official webstore sells a small amount of Fangirl merchandise, some of which was created by fans/former fans, and is still classed as fanart. Other fanart is published on Tumblr and Instagram.

Before (and to a limited extent, after!) Carry On came out fans created their own backstories and characterisations for the Simon Snow characters introduced in Fangirl. Fics normally focused on the Simon/Baz relationship, but not always.

Because relatively little had been established about the characters in Fangirl, characterisation and appearance can differ widely from the 'canonical' Carry On versions of the characters. For example, Simon is often more confident in Fangirl-era fics and more likely to be based on Harry Potter. In the popular Teachers!AU This is Mr Pitch by standalone, Baz is black and bald. In Fangirl, Cath the fanwriter, writes SnowBaz, but reads Penny/Agatha fic. More differences between the two are listed on the Carry On page.

In contrast to the Fangirl-character fics, many fics are very long and may be part of longer series, as the authors put a lot of work into worldbuilding.

More examples can be found on the SnowBaz page.