Evolution of a Rebel 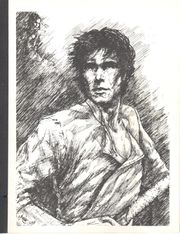 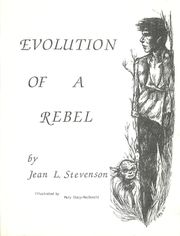 Evolution of a Rebel is a Star Wars gen 165-page novel written by Jean L. Stevenson in 1981. The art is by Mary Stacy-Macdonald. Printed by offset, perfect bound.

A summary: Yoda said, "There is another..." What if that Other wasn't Leia? What if it was ... Han Solo -- strong with the Force, potentially a powerful Jedi, but also absolutely adamant that he was no such thing and refusing to cooperate?"

From an ad in Jundland Wastes #4 "Han Solo finds himself out of carbon-freeze -- on Dagobah debating with a small, green being."

This novel is based upon the fourth and fifth episodes of STAR WARS and only those two episodes. I have yet to read the novelizations of the movies or the myriad comments-in-interviews of George Lucas. I have just finished the Brian Daley books (wish I could write that well!), and I do not read comic books. Also, by the time the SW radio show began filling the airwaves, this novel — begun in June of 1980 and originally intended for publication in May of 1981 — had been finished and was going into final typecopy. Indeed, the outline had been completed within 36 hours of my first viewing of THE EMPIRE STRIKES BACK.

"So what?" I hear you say. Well, if you find similarities to any of the above mentioned publications in the following pages, don't be surprised. I'm a reader of mysteries, a student of film techniques and drama, and a lover of old westerns. I know what it means when a guy is a crack shot, has a trusty side kick that not too many people can understand, and has a stripe down the outer seams of his pant-legs. Just don't expect the similarities to be constant, universal or exact. I'm also a science fiction fan. When I pondered the riddle posed by Yoda ('Other'? What 'other'?), I created a parallel universe to explain where, when, why and how everybody had arrived at the opening of A NEW HOPE.

One small point: I have been informed that 'what is on film is gospel(!), and anything else is gossip.' (Not a direct quote, but close enough.) Well, friends, I've taken a few liberties with the gospel as well, specifically, the events following the deactivation of See-Threepio in the cockpit of the Millennium Faloon just prior to the departure for Bespin. My reasoning? Since the recording secretary was turned off at that point and both of the humans involved were coming from very emotional centers, the power of accurate recollection of this event is forever lost. And we all know that a basic theme of human psychology is that if I (or you or Leia) do not want to remember a small act, then, by George (or by Jean), we won't!

If one had to go by what is usually seen in a fan work, one would be hard pressed to believe in the messianic destiny of Han Solo. Instead of showing us an individual working outside the law who must be cautious in his involvements, resolute in his decisions and commitment to himself, and well versed in the quirks of human psychology, we are all too frequently faced with an awkward lout whose greatest qualities are his tolerance for alcohol and his virility. ‘Evolution of Rebel’ avoids that error and presents us with a Han Solo for who we can cheer and in whom we can believe in. Characterizations, without a doubt, are the strongest element of this novel. Throughout the story, the interests and motivations of Han, Leia, and Luke remain consistent to the heroes awe saw on screen. ‘Evolution’ picks up a complicated storyline from the point where TESB ended and resolves all the plot complications in a realistic and convincing manner. It is a plausible framework for Han’s development into a Jedi, the ‘other’ hope of Yoda. Put simply, the plot revolves around Han’s training as a Jedi, his subsequent growth as a person, and the long-term effects his new status has on Luke and Leia. Luke and Leia are, of course, undergoing changes themselves. The anger implanted by Darth Vader in Luke’s mind is growing into a corrupting bitterness that may cost Luke everything. Leia must deal with her own guilt over the deaths caused by the rebellion, which she can foresee but is unable, to stop. And both Leia and Han must deal with their feelings of love and desire, which will get in the way of running an efficient rebellion. These conflicts are set against a clearly detailed background of secondary characters, all equally well-draw. Yoda is the mysterious, ambivalent Master we saw in the film, but Jean has managed to maintain the light off-beat sense of humor about him. Dodanna and Rieekan are present with Lando’s shiftiness to offset their military stance. Chewie’s portrayal is particularly good; Jean cleverly uses the human inability to understand Chewie to point up the problem of communication between all the principals. She has created her own secondary characters as well. Danogh Thom is the supercilious officer who fancies himself a better cosort for the princess than the inferior Corellian who keeps cropping up most annoyingly. Ibra, a catlike alien, is the catalyst for bring Leia’s guilt to the surface. Caltin is the senator whose personal prejudices are brought to bear against Han. If there is anything to disparage here, it may be in the handling of the dream sequences that give us much of the history that went before concerning the true history of Luke’s father (good twist to this answer to the riddle, folks) and the background to the events that led up to the rebellion. We supposedly see all this history through Han’s dreams where he appears in them as Kenobi. I found these sequences to be occasionally confusing as I tried to guess who was seeing events, Ben or Han; however, it is not such a major flaw as to overwhelm my enjoyment of the story. The illustrations are lovely. Mary Stacey-MacDonald has done highly appropriate pieces. ‘Evolution of a Rebel’ was a deeply satisfying experience to me after reading so many stories that lack the logical reasoning and pertinent details that are important to quality writing. For the rest, it is a delightful story about characters we have all grown to love by a writer who obviously respects them as people. [1]

Jean's novel, without my going into a doctoral dissertation, is one of the most beautifully written and characterized SWars stories I have ever read. It is truly a classic. The thought and analysis that went into this story should be applauded. From the very beginning the Han Solo characterization is something quite different from anything you've ever read. It is the most honest portrayal of our favorite Corellian you can imagine... with all the warts showing! The thing, however, that impressed me the most was the that Yoda's feelings and attitude toward Han were, from the beginning, one of the most beautiful and loving teacher/pupil relationships I have ever read about... This book will be one I will read again and again. Three times have I read it already. Each time I get something new out of it. [2]

It is often hard to find stories as well thought out as EVOLUTION OF A REBEL. The story takes off from "The Empire Strikes Back" with much the same style as the movie. It succeeds in answering those three nagging questions: Who is the other? Will Han be defrosted? and Is Vader really Luke's father? As time was taken in developing this story, so it was in laying it out. The illustrations by Mary Stacy-MacDonald are spaced out so as not to overwhelm you, but to appease one's visual appetite of the story. Mary's Leia shows little resemblance to Carrie Fisher, but still appears as a strong and regal monarch. Her illustrations reflect the emotion of the scenes by use of shadowing, but most importantly, the characters' eyes. There are three such illustrations that stand out. The character's eyes say everything: anguish, concern, and/or love. Mary's moody style is well suited to the story. Another outstanding feature of the zine is the typing. There are but two typos is the entire book. My compliments to the typist and proofreader. As for the story itself, yes, Han gets defrosted, but you know that from the front cover. If anything, the cover tells too much. Jean answers those nagging questions while giving new dimensions to the characters. She gives balance to the story by remembering Chewie, Lando, and Lando's assistant from Bespin, Holis Jon, as individuals and not just support props. With a few short scenes and lines, she establishes a leader/follower relation between Lando and Holis that reminds one of the Kirk-Spock relationship in "City on the Edge of Forever." She also introduces support characters - Commander Danogh Than, Senator Caltin, Lidron, Lyntha, Kirn, and Ibra, who are anything but plastic. These characters add to the story, but do not take over. There are no Mary-Sues in EVOLUTION OF A REBEL. The two main characters are Han and Leia. The similarities between the style of TESB and EVOLUTION OF A REBEL are most apparent with Han and Leia. The storyline for TESB was like tro strands of thread woven together, splitting and then joining back; so is that of EVOLUTION OF A REBEL. The abrupt scene changes used in TESB to accent the separation of storylines are also used. This can confuse the reader, but as in TESB, it contributes to a fast pace. The screen has the advantage of immediate interpretation and digestion, while a novel is more sensitive to quick scene shifts. It takes more time to grasp a shift and there is a great deal of shifting in EVOLUTION OF A REBEL. Once you are comfortable with the shifting, the story begins to flow. Jean takes you frcm the perils and frustrations that Han faces to those Leia faces. She spins a tale with great forethought, each little piece having its own place and purpose. Her Han is smoother, less ragged around the edges, yet with many facets. Her Leia is stronger and more believable. Leia is not the sole leader of the Rebellion nor the super-bitch and sniveling pricess as sane portray her. She has reason and emotions and is very human. Luke is the most neglected of the major characters. He is integral to the story but not the focal point. He does have his shining moments, but if you want a Luke-saves-the Rebellion-again, don't get this book. However, if you want an exciting adventure story filled with romance, suspense, and humor, then by all means, get this book. It is worth every penny and more. [3]

One of the better examples of the Han-is-a-Jedi genre (a genre popular after The Empire Strikes Back. Obi-wan: "That boy is our last hope." Yoda: "No, there is another."). A well thought-out story, with amazing illustrations from the graceful pen of Mary Stacy-MacDonald. [4]