Enter the Grasshopper is a Kung Fu: The Legend Continues anthology fanzine.

There were three issues.

"Get the Spirit or Tune Us Out!"

A message from the editors in a flyer printed in The Celestial Toybox #11:

Advance Warning: We're Christians. WE MEAN IT. We've toned down the violence in our fanzines and won't even look at naughty manuscripts, but we also realize that the opposite side of the fence -- mixing Judeo/Chnstian religion and fan fiction—just might offend some readers. If so, we're nonprofit and non-competitive. Get the Spirit or tune us out!

From the Flyer for the First Issue

You'll know you're being challenged by the demons of low-budget, syndicated television when:

2. You start calling the co-worker you're training, "Grasshopper."

3. The power goes out overnight, and you don't even notice until the district fire marshal cites you for overloaded candelabras.

4. You give up aerobicize in favor of "channeling Chi."

5. You resurrect your early-'70s "natural look" attire, develop a fondness for handmade sandals, and sport a "Just Say, 'Hai!'" bumper sticker on your car. 6. You're shunned at the natural foods co-op on suspicion of alchemy, for requesting herbs so exotic they don't even have them in the catalogs.

7. You read from Benjamin Hoff's The Tap of Pooh to your child/Sharpei puppy at bedtime, and quote Sun Tzu every time your spouse/boss/"significant other" wants to fight.

9. You take up meditating in public parks, at least until an off-duty paramedic cracks your ribs attempting CPR.

11. No pit bull, Doberman or German Shepherd would even think about it.

12. Someone asks you to explain your fascination with "Kung Fu: The Legend Continues," and you respond, "You must learn to see with more than your eyes."

Okay, if you're read this far, you've either got the demons nipping at your heels, or curiosity's put you in the danger zone. But don't despair. Remember, "That which you resist, you serve only to give more power. It is better to yield." Put your writing and/or artistic skills to use.

ENTER THE GRASSHOPPER is a "Kung Fu: The Legend Continues" fanzine open to submissions through February of 1994, or possibly longer. One must not challenge the unpredictable rhythms of the Universe.

Get creative. The only restrictions are, no slash, graphic sex or gore, or killing off characters. We'd really love to see stories that explore the lives of Caine and Peter during their years of separation, and of Captain Blaisdell before he became a cop. In fact, we'd love ANY story that explores ANYTHING beyond the "'Starsky and Hutch' do Chinatown" routine of the program's scripts....

And remember the "Lesson of the Monkey's Paw": "Be careful of what you desire, lest you find your wish fulfilled."

Enter the Grasshopper 1 was published in 1994 and contains 154 pages.

What, you missed issue #1? You have no idea of what motivated us to challenge the demands of time, energy and the pursuit of God, and go ahead with a second issue? Okay, let's just reach into our correspondence file and pull out a random sampling of testimonials:

Enter the Grasshopper 2 was published in 1995 and contains 130 pages. It has the subtitle: "The Tail of the Tiger, the Way of the Monkey."

Cover art is by Roger Gosdin; interior art is by H. Ann Walton and Kerry Ann O'Connor. The zine is dedicated to recently-deceased actor Robert Lansing, who portrayed Captain Blaisdell on the show. 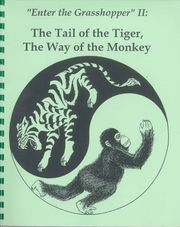 [From a flyer for this issue]: All right, you dedicated Orthopterophiles. The long arms, hairy hands and prehensile feet of Corona Simia Press have once again confronted Destiny—and it won!

[Descriptions of the fiction, see the table of contents below.]. Plus the usual short-subjects, original art by the unrivaled Ann Walton and newcomer Kerry Ann O'Connor, Sheila D.C.'s "interview" with Peter Caine, and whatever else we decide to throw in that won't get us sued, excommunicated and/or mauled by big, mean dogs."

We're charging $20.00 U.S. for this critter, payable to Y.M. Brown (Canadian and overseas customers, the price is the same to you if you don't mind surface mail, which by our experience takes anywhere from one day to two weeks longer. Our pals in the postal network, regardless of bad press, have never lost a package—not even one!). Send orders, inquiries, protests, prayer requests, indictments, flea collars and/or more of those affectionate love letters to the editor (enclose a stamp or I.R.C.--if you don't and there's a problem, we won't acknowledge your order!) to...

Section I: "But the Greatest of These is Love"

Enter the Grasshopper 2.5 was published in 1995 and contains 106 pages. It has the subtitle: "The Demons Made Me Do It!" The cover art is by Roger Gosdin and "Sheila"; interior art is by Kerry Ann O'Connor.

[from a flyer]: You'll never read this fanzine in the dark. But when the moon is full and bright, eerie shadows dance in the breeze beyond your windo and the demons of Canadian-born syndicated television creep in to challenge you. you'll understand why we're doing...

"Enter the Grasshopper" II.V. The Demons Made Me Do It!"

This is what happens when you get late submissions that you just don't want to toss into fanzine limbo....

Yield to the inevitable. Send an S.A.S.E. and give us until June or July to complete the exorcism (that's right -- we're sending the demons to room with you!). 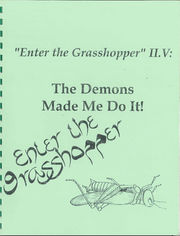 Enter the Grasshopper 3 was published in 1996 and contains about 255 pages. 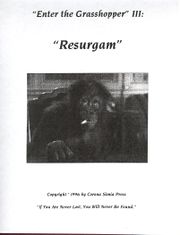