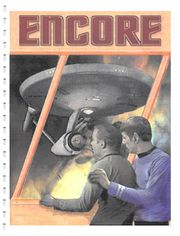 Encore is a K/S slash a 206-page anthology with seven stories. It also has poetry by Robin Hood. It has a color cover by Alison Fiddler and three pieces of interior art by G. Mills, Claudia, and clm.

The publisher describes this zine: "Authors who were once K/S-fans and who for one reason or another left the fandom, are in this zine given another chance to show what they know best; Getting Kirk and Spock together."

Don't you ever wonder what has become of your favorite K/S author? Do you ever miss the way a certain writer has of interpreting your beloved characters? Do you lament when someone who writes Kirk and Spock just the way you see them disappears from the K/S scene?

I know that I do. I was darkly contemplating all these things when one day it occurred to me: why not Invite some of these authors to write K/S again? As my mother often said to me, sometimes a person just needs to be asked! So I scurried about to find addresses, I sent my sincerely worded letters out into the darkness, and I waited. I discovered several things over the next several months. One was that there were good reasons why some of these authors had disappeared from the scene! Life circumstances, ambitions, health and interest all change. I also discovered that lots of the addresses I had were no longer valid. (Hmmmm. I wonder how startled some middle American families were on receiving my fervent communication?) But I also uncovered a few gems: Women who were eager to take on the challenge of once again Interpreting the love expressed between a certain Vulcan and a starship captain. To those authors who are represented in these pages — Elizabeth Scott, Tish, C. Llane de Maler, Robin Hood, Audrey Baker, Fiona James and Vivian Gates — I do extend my most sincere thanks. They assumed the risk of dealing with a first-time K/S editor/publisher, and I do hope that the process was not painful. I enjoyed working with each of these talented writers, and learned from them as well. A few of the stories in this zine require small explanations. From the time the idea for Encore! popped into my head, I wanted to include a reprint story from the very early days of K/S, preferably the 70s. It didn't take me long to decide on The Lost Decade by Audrey Baker. This story was originally printed in slightly different form in The Gropes of Roth, a British zine that came out in the mid 70s, but the tale was actually written several years earlier than that. I am hoping that the many fans who have not yet encountered this moving story will appreciate it, and will be encouraged by it to seek out the other excellent K/S stories and novels that were printed In zines in the 70s and 80s. C. Liane de Maier, author of Save a Prayer, is not technically a former K/S writer. She wrote Star Trek stories years ago In another language, but did not take that big step over into K/S, and hadn't written in years. You could call Liane the featured new K/S author of the zine.

I hope you enjoy this zine as much as I have enjoyed putting it together and interacting with such talented authors, poets and artists. They deserve applause, and I'm so glad they heeded the call of Encore!

See reactions and reviews for Transfer of Affection.

See reactions and reviews for Avalon.

See reactions and reviews for The Lost Decade.

See reactions and reviews for Together in the Afternoon.

See reactions and reviews for Save a Prayer.