The Lost Decade is a Kirk/Spock story by Audrey Baker.

This story was originally a privately circulated story from the late 1960s to 1972. [1] 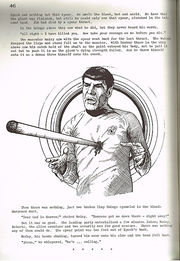 illo for this story from The Gropes of Roth

"Spock awakens on an unfamiliar ship. Ten years have apparently passed that he has no knowledge of, and Kirk was killed long ago. How can he live a life that must be a dream, but is not? How does he cope with loss and sorrow that sears him to his soul? There’s only one way out."

"The Lost Decade" in Gropes of Roth. I dug out my copy and re-read the story. THAT is what I call mutilation of Spock's character. Sure, it could be called Hurt/Comfort, however the "Spock" in that story, I didn't care if he hurt, he certainly didn't deserve any comfort. That isn't Spock as I see him. [2]

It is, in a way, more of a hurt/comfort story than anything else, and is one of my personal favorites—but probably not for that reason. Spock awakens, dresses, and breakfasts as usual one morning, then goes to the bridge, where he is shocked to see not Kirk, but someone he has never seen before in the command chair. The bridge crew is also unfamiliar. He asks the Commodore in Kirk's chair when he came aboard—which astonishes the man. Then, he admits to not knowing the stranger, and remarks that Kirk said nothing about him coming aboard—which further dismays the man. When Spock asks where Kirk is, the stranger (Commodore Peter Roberts) calls for McCoy. When McCoy arrives, Commodore Roberts explains the situation to him, referring to "poor Kirk". At that phrase, Spock's heart stops with fear. He insists on being told where Kirk is, and McCoy tactfully spirits him away to Sickbay. Once there, Spock DEMANDS to know where Kirk is. McCoy explains finally that Kirk was killed ten years ago "in a fight with the locals on Matthias 22", and that he died in Spock's arms. Spock insists, woodenly, that he remembers nothing of Kirk's death. The last thing he remembers is that last night he sat with Kirk in his cabin—and Kirk was alive and in command. McCoy tries to explain all this as delayed shock, and that Spock's memory has blotted all the intervening years since Kirk's death out of his memory.... [the review goes on for several pages, in massive detail]... [3]

I can’t say I was really looking forward to this author’s story after her unenthusiastic comments in the beginning—especially after reading about the changes she made to some aspects of the Star Trek universe and to Spock. It wasn’t so much the changes, as it was the general lack of excitement for K/S. At least she did say that Kirk was Spock’s one true love.

So on I read, and for the most part, I was glad I did.

The beginning of the story is wonderfully done as we watch Spock get ready as usual in the morning and go to the bridge. In the first moment he walks onto the bridge and sees the person sitting in the command chair, his whole world is turned over. All Spock knows is that he went to sleep the night before and now in the morning, there’s a different Commodore in command and almost all the crew are strangers.

McCoy tells Spock that Kirk had been killed ten years ago in a fight and that Spock served with Commodore Chenko until a few months ago and now there’s a new person in command.

This intriguing mystery really holds my interest and I thought was very well done.

Spock remembers nothing and believes he must have dreamt or hallucinated ten years worth of memories. He reviews all the records of all the past events and yet nothing is familiar. His own vivid memories are of being married to Kirk and other events—none of which are recorded including that McCoy married a woman named Pris Ramsbottom (now there’s a British name for you!).

Spock won’t reveal anything to McCoy and goes back to work as if everything is okay. It’s very effective as Spock becomes cold and hard in order to deal with the situation.

Continuing the excellent tension, Spock beams down to a place on a planet where Kirk supposedly had been killed to see if the place could jog his memories. It doesn’t and later the ship encounters aliens who force Spock to fight a creature to the death to save the ship. All this is very exciting and Spock kills the creature but purposely stands in the way of the spear and throws himself on it. But he doesn’t die and wakes up in sickbay. Everything is back to the way that it was. Spock is scared at all that’s happening and won’t talk to McCoy or to Kirk.

Some things were a little bit disconcerting like Spock with green eyes and red blood. Also the writing was heavy on the British style like with the term “bastard” used frequently and lines like: “I want you to have this dope”.

Up until this point, the story was genuinely moving and very involving, but at the end the mystery was never really explained and all I know is it had something to do with Commodore Roberts dying on the planet instead of Kirk, but truthfully, I didn’t understand. And some confusing elements such as the ship being the Constellation without any explanation.

I was very disappointed in the end after such a terrific progression of the story.

But the [missing word] was so good and so enjoyable that the ending was even more disappointing. [4]

This is a great Twilight Zone-y type of mysterious circumstance, where Spock goes to the bridge one morning and someone else is captain; and it seems the past ten years of his being married to Kirk are not the reality. I enjoyed the unraveling of the mystery, trying to figure out along with Spock and McCoy some rational basis for this skewed reality. We might think something traumatized Spock; we might wonder if what he thinks is reality is all in his imagination. The idea that Spock has entered some A/U was the one surmise I don't think the characters voiced, leading me to believe that might be what had indeed happened. And it was...I think. Some kind of switch at a moment of temporal flux or something. One small mis-incident and the entire universe

changes. Spock can't hide from the captain and crew, and McCoy, that something is amiss, that he's lost memory (some kind of delayed shock, they think); but it was so anguishing to suffer along with him, his having to conceal what he had thought was reality. That this reality included being married to Captain Kirk, he cannot possibly reveal to anyone.

We learn as McCoy reminds Spock, that Kirk was killed ten years before. This is great scenario. Could he have dreamed it all, his relationship with his captain? His only course of action now is to become super-Vulcan. He studies up on the past ten years of this supposed reality he's in, and proceeds to do his duty, pretends he really does remember.

There are some pages of long, dense thought passages. Then there's a snippet of live action with dialogue, after a long period of exposition; and I wondered at the choice of beginning the "live" part at this little scene. It's a small encounter with a yeoman, how Spock feels nothing for her stupid emotion. He's nasty to her and others, totally cold; and then loathes himself. Nothing wrong with this scene; but I had the thought that it takes on more significance because of its jumping to life all of a sudden after all the quietly "told" stuff.

Also, I don't care for exclamation marks in inner thought (nor do they have a place in exposition, I don't think). Is using them perfectly proper and I'm just being persnickety about it? And there are some words and allusions that feel un-Vulcan when we're in Spock's head.

This author apparently made up her own universe because she didn't like things about aired Trek. But why are they on the Constellation, not the Enterprise? Since this is such a long story without Kirk, I would have liked more scenes in Spock's memories where we see Kirk.

Spock doesn't want to believe it at first, that he's back in the reality he knew; but then all is well in the end, after a sweet and emotional sickbay scene.[5]