The vid was available as a stream at imeem and YouTube but imeem is no more and YouTube has terminated fabella's account due to multiple third-party notifications of copyright infringement.[1] The vid is still available as download.

The thing about Merlin, is that it is not a source all by itself. There is such a wealth of history to the legends, so many interpretations, that it's almost impossible not to tie that in with the canon they're giving us. And the most striking legend, to me, is that of Merlin as a man of the forest. That concept caught me. I knew I had to vid it. When it comes down to it, I made this video for the end clip, the money shot if you will. Merlin, as a tree. And maybe, maybe not (depending on your interpretation), Arthur is actually culpable, in a allowing it to come to pass kind of way, of entrapping Merlin in the tree. You can't touch a butterfly with your fingertips without risking its death. A fairly dark concept for me, of late.

This video incorporates a lot of outside source, which isn't something I've done too much of since Hemorrhage. There's far more of it here. I couldn't get enough of outside source with this one. I did manage to cut myself off when I felt I was distancing the audience from the heart of the story, but you never know how well that works until you get your reaction from the public.[2] 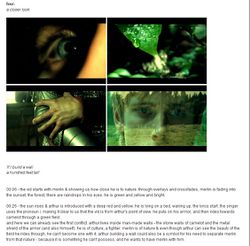 screencap showing an excerpt from the vid commentary by tearful_eye

tearful_eye did a long and insightful vid commentary on Elemental in 2009.[3] It features many screencaps and a wonderful analysis of the vid. Excerpt: "merlin is a magical fantasy fandom - it's about teenage boys and magic, it's about a legend. everyone sees something different in it, cause the arthurian legend is VAST and no one can say they know exactly which version is 'true' [...] when you first watch the vid, there are some things that become immediately apparent: the title, the colours, the outside sources, the song. the colours. they are bright"[3]