From Fanlore
(Redirected from Droid and Tribble)
Jump to: navigation, search

Droid & Tribble is a multimedia newsletter of reviews, trivia and opinions about Star Trek, Star Wars, Space: 1999, Logan's Run, Quark, Man from Atlantis, Charlie's Angels, Fantasy Island, etc. The publisher describes it as "offbeat." Each issue was about ten pages, and it was published every six weeks.

There were at least ten issues.

On the cover: "Suum Cuique," which is Latin for "to each his own; to each what rightfully belongs to him."

Did you ever stop and notice that greatness comes in pairs? Consider Antony and Cleopatra, Samson and Delilah, Lewis and Clark, Simon and Garfunkel, Starsky and Hutch (?) to name but a few. Now, two new heroic figures proudly step into the spotlight of success to claim their place in history.,.DROID and TRIBBLE, (who?)

We have chosen these two compelling characters to be our mascots for this zine because they symbolize something special in the astonishing world of Science Fiction. In the Star Trek quadrant of the universe, anyone (well, almost anyone) can be a brave Kirk or a logical Spock. It takes a certain charm to be a tribble. Residing in the quadrant of our universe reserved for Star Wars, it isn't too difficult to imagine yourself among the ranks of young Luke Skywalker or the always blasting Han Solo, Yet, when it comes to sheer personality, droids like C3PO or R2D2 never fail to outshine their owners.

How are we like our mascots? This zine, while containing the usual elements (news, reviews, trivia, etc..) is often as whimsical as a tribble and as unpredictable as a droid. Our scope on SF is as wide as the cosmos. We will, however, deal with Star Trek and Star Wars on the most regular basis. Just remember, that with us, anything is possible...

Droid & Tribble 1 was published in 1977 and contains 9 pages. The editor was Anthony Targonski.

From the editorial on page 7:

Well, I suppose it's going to happen again and Star Wars is going to he the cause. What am I talking about? The greatest problem in the SF cosmos...DIVISION, Don't misunderstand, I'm not saying ANYTHING against Star Wars, I'll be a fan forever, (see D+T SP FOCUS ON STAR WARS on page 8) Yet, I contend that this film, like a few others in the past, will probably serve to divide SF fandom. Currently, there exists a situation in which some fans of Star Trek (I like that show too, of course) refuse to even ADMIT there is any other type of SF material, I've heard of loyalty but that is ridiculousI Although personally, I am loyal both to Star Wars and Star Trek (and a few others) I am always open to any other well made SF movie, TV show or book, (If some multi million dollar SF movie about a creature named "Irving" came out and it was well done, I'd be a fan of that too).

The point that I'm desperately trying to make is that "trekkies" (I hate that word) and Star Wars fans (Warriors?) are not mutually exclusive. This might seem a trivial point, but remember that most Star Trek conventions indirectly "grew out of" regular SF conventions into an entirely separate entity and some fans are very narrow and select in their SF scope* Admittedly, I've said, elsewhere in this zine that, although we will touch on all aspects of SP, that we will deal with Star Wars and Star Trek on the most regular basis. I don't think that I am a "divided" SF fan though. Sure, if some wonderful film titled Irving was released, we might even change our name to DROID, TRIBBLE & IRVINS (but don't bet on it).

Ignore me if you want, but I'm not to blame if there is some future battle between Star Trek and Star Wars fans (or Bionic and Atlantean fans for that matter),Our glorious realm of SF fandom is one of the few areas that occasionally attacks itself for no reason. It must stop. Perhaps, this entire column could be summed up via the Vulcan IDIC (Infinite Diversity in Infinite Combinations), In other words, be an "exclusive" fan if you really want that, but respect the ideas of other fans. If this can be remembered when two opposing fans meet, a Federation-Klingonlike confrontation could be avoided. Or do we need a "Science Fiction Liberation Movement" to unite us? 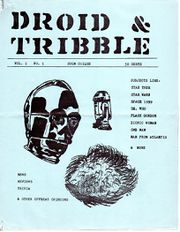 Droid and Tribble 2 was published in August 1977 (zine itself is undated, date taken from the postmark) and contains 9 pages. 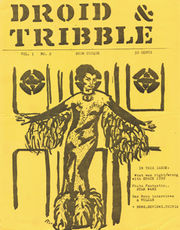 Android & Tribble 4 was published in November 1977 and contains 9 pages. 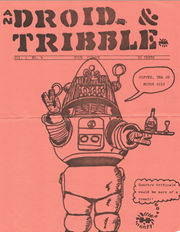 Android & Tribble 5 was published in January 1978 and contains 9 pages.

Android & Tribble 10 was published in October 1978 and contains 9 pages. 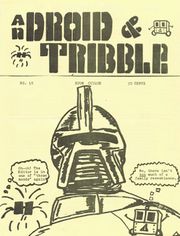 This little newsletter, published on a roughly bi-monthly basis, opens its pages to all [media] interests and offers a collection of readings which would fill one casual setting. The feature, whittled down to bare short-short minimum, bounce and babble on many topics with quick puns, mini-editorials, games and news, all smoothly 'ushered' by tribble cartoons. The newsletter also offers an 'in-group; welcome which is warm and simple enough to envelop even a new reader. A+T is not a slick, or even near-slick, endeavor, but most clearly does not pretend to be either. The features are to-the-point, but evidently the writers and the editors are enjoying themselves, and some readers will, too. Some others definitely will not: 9 pages of typewritten material for fifty cents plus a stamp may be too dear or the unappreciative, but young teens, tribble fans, hobbyists, trivia nuts, collectors, or casual browsers may find what they've been looking for in the 'Android and Tribble' newsletter and staff. [1]