Doujinshi (同人誌) are self-published Japanese works in manga or novel form that are created by amateurs as a hobby from fans rather being paid as to do so as an profession.

Creating doujinshi/fanbooks is a vastly more prevalent fan activity in Japan than in the West, but Japanese doujinshi is a large part of Western anime/manga/video game fandom. Many fans buy and sell doujinshi imported from Japan and share translations, scanlations, and preview images: see for example the doujinshi_club community on LiveJournal.

Needs Citation: This article or section needs more citations. See Fanlore:Citation for more information on why.

Doujinshi does not usually have a big presence in non-Japanese Western fandoms, with the exception of Harry Potter where it is quite popular. Doujinshi has a small presence in a few others, such as Supernatural.[1] 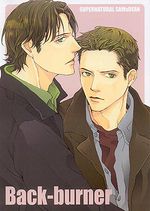 Cover of Back-burner, an example of a Doujinshi in Supernatural fandom

Importing doujinshi from Japan can be extremely expensive, and serious collectors spend hundreds of dollars a year on doujinshi. In Japan, doujinshi are sold for 200-1000 yen or about $2-10 USD, but non-Japanese online stores commonly triple (or more) that price, and doujinshi are commonly listed on places like ebay for $50 or more. A few notable bids have gone as high as $200 and $300. Shipping prices can also be rather expensive, $10-25 to ship one book. The relative rarity for specific titles, coupled with demand for certain skilled artists, will drive up the prices. Due to the high cost of even just one doujinshi, many fans outside of Japan cannot afford to buy them.

Fanworks created in a manga style by Western artists are sometimes referred to as doujinshi, and their creators sometimes see themselves as doujinka.[2] Due to the prevalence and acceptability of transformative works in anime/manga/game fandom and the Japanese manga market in general, Western doujinshi artists are more likely to create and publish fancomics than comic artists working in more traditional Western media.