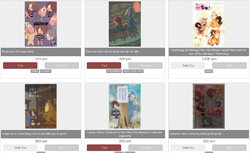 Gegege no Kitaro doujins for sale on Mandarake's website

Mandarake is a thift store chain in Japan that began as a used bookstore, but now sells used manga (professional and doujinshi), anime DVDs and figures, video and card games, Cosplay items and animation cels. Mandarake ships internationally, so are often used by Western fans to import merchandise not licensed to their countries. Their stores are also somewhat of a popular tourist destination among foreign otaku, sometimes appearing in vlogs. Their website is available in languages other than Japanese, albeit machine-translated and full of errors.