Double or Nothing (Starsky and Hutch zine)

From Fanlore
(Redirected from Double or Nothing (Starsky and Hutch fanzine))
Jump to: navigation, search

Double or Nothing is a slash Starsky and Hutch fanzine.

It's only good manners to give fair warning right here, before you proceed any further ... Nut Hatch's Starsky & Hutch zines are slash. They can be pretty explicit, and they almost always pursue "serious" plotlines that will grab you and pull you in. LoCs to the press have, time and again, remarked on the fact that this is "serious fiction," rather than "fluff." Other remarks point out the depth of the research, the handling of the characters, and the quality of the writing. But these are also "feel good" zines, where the end will always leave you smiling. And perhaps wanting more! Age statement with order, please. 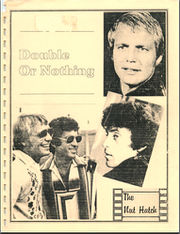 inside art by the author 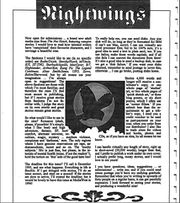 flyer for "Nightwings" from issue #1

Double or Nothing 1 was published in June 1995 and is 163 pages. The sparse art is by the author.

This zine includes a very lengthy flyer for a zine called Nightwings, one which never materialized. It was to be a slash multimedia zine that had the characters "vampirized."

All the stories in this anthology are by Jane ... though it wasn't for the want of asking other writers for their contributions! Some authors couldn't live with a mid-1995 deadline, others just couldn't feel their muse, so this anthology is, not unnaturally, from the Nut Hatch's old workhorse (she takes that as a compliment!)

As I said in the last issue (Flashpoint), if it hadn't been for the good works of Linda McGee and Tabby Davis, I should have gone stark, raving mad in 1994/95. In fact, Starsky and Hutch saved my sanity, if not actually my life, and I promised myself, as well as everyone else, I would be there at the 20th Anniversary with a zine! And here I am. 'Double or Nothing' is almost a first for me: I never produced a full-size S&H zine before! Also, I never 'flew solo' before, on a zine where the content is 100% American... As luck ran, I found a very, very good US spellchecker, so I'm 95% sure I'm spelling your language correctly! And I force-fed myself all the American TV I could find, and actually looked for the differences between Aus and US culture, rather than the similarities, so that I could get as many of the details correct as possible. Well, that said... there are bound to be errors in this issue, and I can only beg your indulgence. I worked very hard, did the best I could, but no one in this life is perfect. If I've made mistakes, forgive me! 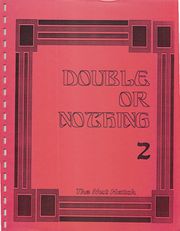 This zine has been formatted for American Letter-size paper so that printing and con-based distribution can more easily be handled by Jackie Beeman. Nut Hatch zines are usually on the Australian A4 size, but the different format of this issue does not indicate that the zine in your hands is bootleg! As usually, Nut Hatch is doing some 'graceful groveling/begging that this zine is not copied between friends - for the usual reasons.

Double or Nothing 3 was published in March 2002 and is 155 pages. Cover and interior art (black and white photomanips) is by Jade. 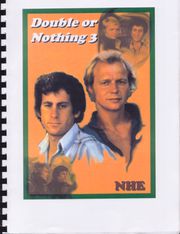 Link to the flyer is here.

The flyer describes a CD that may or may not have been part of this zine:

DORN #3 will also have it's own disk disk — probably a CD — under the back cover, loaded with the artwork from the zine. So you can enjoy the digital artwork from the zine in color. The art will be rendered to "rastar halftones" for the zine ... photocopiers can handle this best, even though you definitely lose a dimension when you lose the color. The cover will be digital color; the whole project will be coil bound, at A4 size. Right now, we have enough to make about 130pp, and with the addition of another story we'll have a good 165pp issue, well-rounded and designed to "feel good" throughout. [1]

From the zine's title page:

All the art appearing in this issue is the work of "jade," and takes the form of digital paintings. If your copy of this zine is an origial copy, you will find a picture disk under the back cover, giving a selection of the art for DORN #3 as high quality PEG files. If you have purchased this zine and not received the picture disk, you may have a bootleg copy!

Jane of Australia, the editor, also writes of the fundraiser for the new printer and of some of its results:

The words "welcome to a new zine" leap to mind. And also, this issue is a quantum leap, literally, over the previous ones. We never before had the ability to illustrate the zines to the extent which the fiction most certainly deserved; and that situation didn't change until very recently (like, the few weeks prior to the printing of this issue!) when, after a decade and more of faithful service, the old HP LaserJet IIIP decided to go to that great printer workshop in the sky.

Immediate panic gripped NHE (which is of course an amalgam of Nut Hatch and Entropy Express: more about that later). Real, serious panic, folks, because a new printer costs serious bucks and we're on a pretty tight budget! Fortunately, a combination of ingenuity, desperation and a goodly amount of kindness on the part of early-ordering fans came to our rescue. We launched a fund-raiser, and enough people pre-ordered to allow us to go get the printer and get it installed in time to be actually printing this zine in May 2002, as we'd promised. Thank you, thank you, to everyone who was kind enough to do this.

Two pieces of fantastic news come out of this. The first thing is ... the new printer is capable of outputting very nice halftones indeed, and gives us the ability to illustrate the zines properly. This is the first issue where we've been given the chance to indulge ourselves in the artistic side of zines, and ... wow. The second wonderful thing to come out of this story is that the necessity to launch a fund raiser to help pay off the new printer made us look around for something new and delicious. By an astonishing stroke of luck, we'd just had the chance, a couple of months earlier, to get a CD burner at a price you would not believe. And out of the blue an old project, looong on the back burner, was brought out of the drawer. In all probability you're holding the first of the series of disks in your hands even as you read these words!

For that reason I don't want to babble too much about it here, save to say that if you ordered the zine and not the disk, and perhaps don't yet know about THE STARSKY AND HUTCH MEDIA ARCHIVE, I urge you to visit the website and see what you're missing! The web address is still... http://www.leisuresoft.net/dom/home.htm.

The task of the archivist was not easy, and it was one heck of a challenge, but we think we made an excellent job of this first volume. It'll take five more just like this one to cover the whole archive and we would like to get it done in the next ten months.

So many people, over so many years, have asked me to loan the STARSKY AND HUTCH MONTHLY magazines, or camera copy them, or xerox them ... none of this was ever possible, but they archive to CD with perect [sic] results. Setting aside the printer (which was really only the initiator for the archive project), the whole object of this is to preserve a piece of history forever: to change nothing and to rescue everything, permanently. We've made a good start, though there's a long way to go ... and it's going to be fun!

A fourth issue was planned but not completed:

While DORN #3 is full, we're very happy to accept stories for #4, though at this time you must understand it will probably be on a 2003 publication date, due to boat-loads of prior commitments. So... (editor's hat on now!) I (JJ) think what I'm looking for is this: A good drama, first. Lots of plot, please. Next, that old "light, humorous situation comedy," driven by any plot twist you can think of, filled with chuckles. Third, a really good "relationship" piece, with a happy ending. Fourth ... anyone got an imaginitve a/u??? These four pieces, if they came in at about 30pp each, would make a very nice zine indeed. Add about 10pp of art, covers and so on, and we're off to the races! [2]