Distasis is short for DImensional STASIS. It is the name of a multimedia fanzine [1] with an emphasis on crossovers. It is also the name of a fan fiction archive that has been around since the 1990s which contains reprints of some of the stories from the issues plus many other works.

The 'zine is a gen multimedia fanzine edited by Laura Michaels. Both the 'zine and archives contain positive stories suitable for all ages with upbeat endings.

The name is a reminder that the stories and other works in this 'zine attempt to present material that is true to character and faithful to the universes they recreate. According to the 'zine, "Its mission is to share positive, humorous, entertaining and upbeat material with its readers." 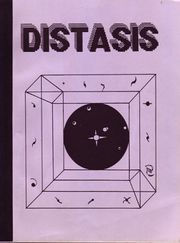 Distasis 1 was published in 1990 and has 249 pages. It features A-Team, Battlestar Galactica (1978) and Star Wars and Star Trek. It contains 130-pages of The A-Team fiction and an A-Team comprehensive episode guide by Michele Lellouche. Illustrations and graphics by Gennie Summers, Paul Pence, Michele Lellouche, Rachelle Wadsworth, Laura Michaels, Sid Michaels.

Its mission is twofold. One, to seek out material that is positive, humorous, and entertaining; to find anything that will make people feel good when they're reading it. Two, to present material that is true to character, and faithful to its universe. In other words, this fanzine tries to create a Dimensional STASIS where the situations are as realistic and accurate as they were in the original media presentation of any particular universe.

DISTASIS is also intended as a home for material that has a hard time being placed elsewhere. For example, it's very difficult to find a 'zine to take A-TEAM material, but there are a lot of good A-TEAM stories and people interested in reading them.

I'd like to thank all the contributors for their help in making DISTASIS a reality. I'd also like to thank Judi Raish for her expert advice on the more technical aspects of putting a 'zine together in the D/FW area.

There are no plans to produce any further issues of DISTASIS. (However, if I get enough assorted material in my files AND enough people are really interested in seeing it, I may consider another issue of DISTASIS some time in the far future.)

Distasis 3 Open for submissions. The editor will produce future issues as long as authors are still interested in submitting to 'zines. If there are enough submissions to go to press, this issue will either be a small print run mainly for contributors and those interested in the 'zine or if there's a large interest, it may end up as an e-publication. The focus of this issue would most likely be shows like Legion and Generator Rex.