For many years, obtaining fan art was out of the reach of most fans due to limited availability, difficulty in reproducing prints and of course methods of distributing,. However when a fan did obtain fan art, the question became one of how best to display it.

The type of fan art also played a role in the display of fan art - whether in public or in the home. The display of explicit or slash themed fan art was often restricted.

Some Examples of Framed Fanart

I actually had the privilege of seeing these covers in the original at Shore Leave, and I deeply envy the person who managed to bid high enough in the auction to buy the front cover, and the lucky K/Ser who walked away with the back cover during the private showing of K/S art. [2]

What is Public? What is Private?

One fairly common phrase in fan's comments and reviews of fan illustrations is that it is "suitable for framing." 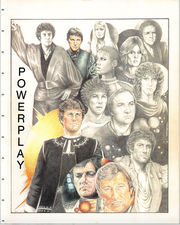 issue #1, cover by Suzan Lovett: "Each one is worth the price for the color Lovett cover alone. (In fact, I've heard that when the zine was first published, purchasers received not only the zine but an extra copy of the cover print, "suitable for framing." Dunno if that's actually true, but I've got framed copies of two of them, acquired at cons.)" [3]

From the editorial of He Who is Close to Nature: "...a limited number of copies of 'Nature' have been printed for the Sahaj fans. This cover, done by the magic pencils of Alice Jones, is suitable for framing."

A fan wrote: "Elizabeth Urich's Trilogy of UNCLE stories is out, summoning the Faithful not with pealing bell or cross and flame, but with another of Suzan Lovett's magnificent covers, suitable for framing or enlivening the ceiling of your local domed cathedral." [4]

The editor of Alien Brothers wrote: "Pre-orders will receive their zine first, and also I'll send the first 30-or-so a copy of the gorgeous [ Gayle F ] fine art print, suitable for framing (non-explicit)." [5]

The Lack of Venues for Public Display

...my decorative taste runs more towards the abstract, or of photos/paintings of landcapes etc. I'm not so big on having pictures of people on my walls, and I'm definitely with you on preferring to leave most of it to my imagination. That said, I do have one Fraser/Ray K manip (which is safely in a drawer *g*) where the guys are half naked, but you can only see the top of their torsos. A lot of fannish art isn't to my taste, either. Having it in a zine is fine, but I wouldn't want it on my walls. That said, I have been to some people's houses where they've got some lovely stuff up on their walls, some of which I would like myself if I went in for having fannish stuff out on display. [6]

The fan art thing is both interesting and astonishing to me. I could cope with the odd fridge magnet, or maybe a mug or keyring, but I can't actually imagine having anything fannish on my walls. Partly due to having to explain it to family and friends (Anne's so weird -- she has pictures of TV actors on her wall -- naked!) and also due to the fact that I don't actually like a lot of what I've seen. I prefer to leave it to my imagination. [7]

I think some of it might be guilt/personal baggage. To me reading is a private activity, and I have no problem with the fact that I read fan fiction secretly (though I do worry about those piles of printouts in the attic!) But I look on art as essentially a public medium, something that is created to be shared and displayed. If I felt I couldn't do that with a picture because of the subject matter, then it almost descends to the level of a porn magazine hidden under the bed. ... Then I got to thinking about exactly what, in both genres, would I be prepared to leave lying around for public scrutiny and what I would hide away. I wouldn't leave slash lying around; but then I'm not sure about a professionally written erotic gay novel either. I'd have no problem in displaying a painting of two naked Greek wrestlers in a homoerotic pose, but I would never display an obviously fannish drawing or photomanipulation. It would have to be 'disguised' as something to give it credibility (you think it looks like those two actors from TV? No, it's a photograph by Robert Mapplethorpe!). So it is all to do with context, and nothing to do with quality. Which basically is stupid. If I like something I should be proud enough to display it, whatever the subject matter. [8] 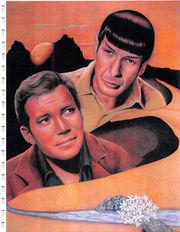 The cover of the Star Trek zine Promises to Keep, art by by Caren Parnes. In 1996, a fan wrote: "Last week, two repairmen were in my house and one of them came into my dining room, which is covered with Trek memorabilia. He twisted his hands, lowered his head and muttered that he was a Trek fan, too. 'I like the guy with the visor,' he said, speaking to the floor. 'And I like the robot, a little. But what I really like,' he pointed up and at the original cover of Promises to Keep that I have framed on the wall, 'are those two fellows Kirk and Spock. Do you like them, too?' Needless to say, he did an excellent job installing my air ducts, and I kept him supplied with lemonade throughout the day." [9]