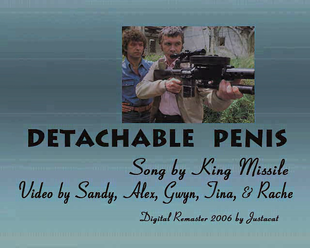 Detachable Penis is a The Professionals vid, which was a part of the Media Cannibals/Tape3. It was digitally remastered in 2006 by justacat.

It is a perennially popular look at the series' phallic imagery and emphasis on guns and their connection to masculinity. Some people have interpreted the vidder motivation as being a critique against gun violence in series of the era; however, the vidders had no such intent, and actually enjoy that imagery immensely.

"Sandy sent me the lyrics, and I thought she was crazed, so I deleted them. She sent them again, and I still thought she was crazed, but I began to ponder... once we hit on the penis=guns motif, the insanity turned into a challenge, and then a fun game, and before we knew it, we had the weirdest, wackiest, craziest vid, and hey, it worked! Boys will be boys, and the Lads love their weapons. And so do we."

The idea for the vid originally came from Shoshanna who submitted the idea to the Virgule-L mailing list in July 1997:

So I'm driving home tonight from a very enjoyable Pros party, and I've got the radio playing, and this song comes on that just makes me crack up, because all of a sudden I realize what a great songtape it would make, paired with footage of the Lads shooting, and cleaning their

(The DJ claimed that it had been requested by Dick, in Cockeysville, but then admitted that he'd made that bit up...)[1]

"Yay for older vids going up online! This is one of my favorite vids ever, and it's one that everyone should watch, whether they know Pros or not. It's just fun! It's also that rarest of humor vids, one that's pure metaphor -- most humor vids are more likely to vid literally to the lyrics to make the joke, but the joke here is the nonstop metaphor. It's fabulous." [2]

"The Man Song" and "Detachable Penis" from Media Cannibals, on the #3 tape. Howlingly funny and, again, you do not need to be a fan of either show (Sentinel and Pros, respectively--not a fan of either) to "get" it. We show "Man Song" at Vidcon every year, I've seen it dozens of times and it's still funny. Oh, and also on that tape? The Bonanza theme used for Highlander. You need to get this tape.[3]

"I first saw this vid at Vividcon, and lo, there was staring. On each subsequent rewatch it doesn't get any deeper - because penis substitutes + men + lots and lots of weapons is your basic equation for this vid, but it DOES brainwash me into thinking I want to watch Professionals sometime. And that blowing shit up is fun, but we all knew that already. Very cool vid; and no, you do not need to know a SINGLE thing about this show to appreciate this."[4]

"Watching this for the first time earlier this year, I fully and clearly understood why justacat felt the need to digitally remaster this and thus preserve it for the fannish ages. Few vids have made me start laughing on the first clip, but this did. Actually, I was kind of giggling just from the opening screen, because people vidded this song! I would have bet, if you'd asked me, that this song was totally unviddable. I mean, it's a classic, yes - certainly a classic of penis minstrelsy - but it has spoken lyrics. And it's about a dude misplacing his detachable penis. These things do not say "vid song" to me. But that is why I am not a vidder, and also why the Media Cannibals are geniuses, because this is just about the best vid ever. And, no, you don't need to know anything about the Professionals to watch this. [...] Here's what you need to know: they're guys. With guns. And the Media Cannibals took those two salient facts and made - well. This vid. It is wonderful and hysterical."[5]

"One of the first songvids I ever saw, and it still stands up *snicker*. Watch Bodie and Doyle search for their missing penis. LOL."[6]

"I have no idea what fandom this vid is actually from but I laughed my ass off nonetheless."[7]

"When I was at neery's, she showed me a Pros vid to a song called Detachable Penis. It was hilarious, so I went online to find it. I did so here. I also found out that it's a vid from 1997. Nineteen-ninety-seven, guys! Windows '98 era. No WMM, only VCR players and tapes. Seriously, compared to some of the crap people upload to youTube these days and call a fanvid, this is genius. I really don't want to know how much work it took to make it, though. >_> Anyway, fandom vintage. Go take a look, if you feel like it. You don't need to know anything about Pros--the show or the fandom."[8]

"And, when I absolutely, positively have to get cheered up, Media Cannibals' Detachable Penis does the trick every time."[9]

"This classic vid was created in 1997 by the Media Cannibals collective who combined the song Detachable Penis by the band King Missile with clips from a late 70s British crime drama called The Professionals. Incredibly, the vid was created with tape to tape VCR technology making the precise edits to the lyrics all the more impressive. We wanted to post the vid because we think it offers an insightful look at the media portal of masculinity using guns and other weapons as a hilarious metaphor for the penis. We read it to be critical of the violent and phallocentric concepts of masculinity that are driven by the media. However, we want to note that this was not exactly the creator’s intention. The Media Cannibals did intend to make fun of phallocentric media culture but insist they were not trying to be critical of the violence and guns on TV per se. While we may project our own points of view, critical or not, onto remixes and vids, it’s often important to understand the original intent for the piece. Because remix and vids are not an necessarily inherently critical form, we viewers can only rely on the visual display of content and the intent of the creators to decide whether or not they are political in nature."[10]

"From the Media Cannibals, originally made in 1997 ca. and remastered by justacat in 2006, a songvid: Detachable Penis. The song is from King Missile (you'll find the lyrics in the page linked) and this is a songvid that any slash fan can enjoy, whether they are Pros fans or not. It's such a great union between (ironic) lyrics and images, the perfect choice of clips, and a clever and intelligent meta-commentary in so many ways, about the Fallus, and what people (men) do with it, how fans play with it. It's a milestone in vidding, imo, and in Pros vidding. Enjoy :D"[11]