Depth Charge is a gen anthology.

One issue contains seaQuest, one Battlestar Galactica, one Voyage to the Bottom of the Sea and the rest, The Tomorrow People. 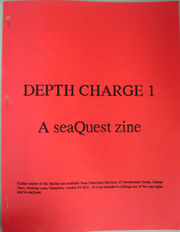 Depth Charge 1 contains 99 pages. It is an all seaQuest zine.

Depth Charge 2 is a Voyage to the Bottom of the Sea 43-page special published without artwork. It contains four stories by Angela Field. It is undated. 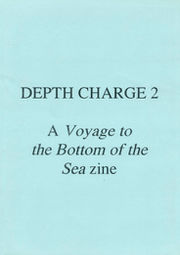 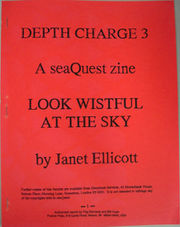 Depth Charge 3 contains 125 pages and is a single novel by Janet Ellicott called, "Look Wistful at the Sky".

Mandatory psi testing reveals that O'Neill has a high psi factor. He is uncomfortable with the fact and doesn't pursue it, although one of the scientists involved, Dr Oral, keeps track of him over the years.

Years later, seaQuest is lured into a trap by Dr Oral, who keeps a launch crew captive just long enough to run tests on four of them, then abandons them. During their captivity, Bridger notices that one of the guards looks like his son.

Noyce orders seaQuest to track down some rogue submarine raiders and tells Bridger, during the briefing, that one of the commanders looks very like Robert. O'Neill is put in charge of the project team and, with the help of two telepathic teenage geniuses, discovers Dr Oral's plan: she has been developing the perfect soldiers, and breeding their telepathic controllers. 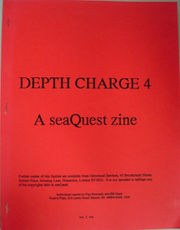 Depth Charge 5 is a 55-page Tomorrow People zine. All stories by Janet Ellicott.

Depth Charge 6 is a 59-page Tomorrow People zine. All stories by Janet Ellicott.

Depth Charge 7 is a single Tomorrow People 81-page novel called, "But What Happens Tomorrow?" It is an alternate universe story by Janet Ellicott.

Telepaths have been on Earth long enough for them to have been absorbed into the armed forces and intelligence services. Everyone accepts that telepaths must be taken out of normal life, away from their families, for the protection of the general population, everyone except the telepaths who live a life of virtual slavery, with little or no rights. They are waiting for the next evolution of mankind, the Tomorrow People, but they are not the only ones. Director Damon suspects that his own son is a Tomorrow Person and brings him and the others into the intelligence directorate, where he can protect them, or use them for his own ends, but others in PSIPRO know what he is doing, and it is only a matter of time before the six Tomorrow People have to take on the intelligence agencies of the world.

No-one seems aware that Adam, Lisa and Megabyte were not the first Tomorrow People, that others came first and were taken away from Earth before they could be forced to join PSIPRO. They are about to return but why? What do they want?

And what do the Russian and Chinese Tomorrow People want?

Adam and Megabyte make contact with a group of Tomorrow People who are about to Break Out. When one of the boys says he is at Project Darkover, Megabyte asks his father if he has heard of the Project. Damon has: he used to work there but he thought the Project had been closed down. His enquiries lead to a recall, and soon he and the two American Tomorrow People are part of a Project whose sole purpose is to train and, ultimately, breed telepaths and teleporters for intelligence work. Damon and the Tomorrow People are all determined to end the Project, once and for all, but cannot find a way to do so, until they discover that one of the girls at the Project is in contact with another group of Tomorrow People, a group General Damon has heard of but never been able to make contact with.

Depth Charge 10 is a 52-page Tomorrow People story by Janet Ellicott called "Can it be Aliens?"

When he starts to feel broadcast pain, Megabyte jokingly says that aliens are obviously trying to make contact with the Tomorrow People. The real truth is far more sinister. British Intelligence are forcing pre-Break Out Tomorrow People to work for them and they want Adam to train them. Fortunately, Adam's group are not the only Tomorrow People on Earth and Negabyte is soon receiving a message from someone who says he is a second generation Tomorrow Person. While General Damon makes his own attempt to rescue Adam, Frank is taken to an underground base and asked to cooperate with people he didn't know existed.

The final series of stories to complete the Orion saga, this zine follows on from "Frak 3" and takes the Galactica, finally, to Earth, with a few surprises along the way.