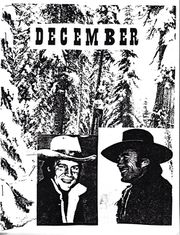 December is part of the Davis Diary and Callahan Calendar, a Harry and Johnny series by Ruth Kurz. The author thanks JL, MW, E&A, DMc, and JM.

This novel contains 110 pages. It has many black and white screenshots (some appear to be early photomanips) of Clint Eastwood and David Soul in various productions. There are also other screenshots and publicity photos of various actors who were fan-casted into the story (Paul Michael Glaser as "Ben," Gary Sandy as "Sandy," Robert Redford as "Richard" are three examples. "Sandy" and "Richard" are a couple.). There are also two hand-drawn illos, one by Tracey and one by Ruth Kurtz.

There are two sets of song lyrics, one by Debbie Hupp and Bob Morrison: "You Decorated My Life." The other is "Lovin' What Your Lovin' Does to Me" by Conway Twitty and Loretta Lynn.