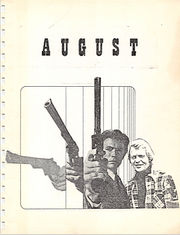 August is part of the Davis Diary and Callahan Calendar, a Harry and Johnny zine series by Ruth Kurz.

This novel contains 95 pages. It has many black and white screenshots (some appear to be early photomanips) of Clint Eastwood and David Soul in various productions. This zine also contains two black and white illos, one by Ruth Kurz and one that may be by Kurz but is unsigned. There are two sets of song lyrics by Paul Williams.

Summary: "Harry and Johnny fly to the National Pistol Matches."

I can't really handle H/J (Harry Callahan and Johnny from Magnum Force). I just read August and they were so yucky sweet. It's as though they wanted to liberate men by endowing them with "female" characteristics and chose some of the nurdier. Women can be straight and true and don't have to act so clinging and sexually compulsive. They were in a shooting match and won a setting for 12 of silverware. I haven't yet been to a gun meet, but I have been to gun show and it didn't ring right. [1]