DHD stands for Dial-Home Device, the device used in the Stargate universe to activate a Stargate. This Jack/Daniel slash Stargate SG-1 fanzine is named for that device.

The zine has full numbered issues, and also some half numbers. 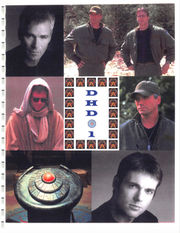 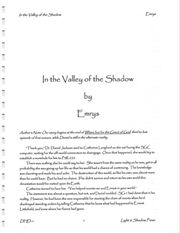 The editorial is prefaced by a bit of fourth wall meta:

"See what?" Jack O'Neil groused, looking around the clutered stack of papers, books and journals upon the archeologist's desk.

"The new one," Daniel explained with exasperation, moving straight to the third pile from the left, which looked a lot to Jack like the third pile to the right. and pinpointing what he wanted, snatching it up and handing it to Jack with a look that said how could you not have found that "The new Light & Shadow Press zine. It's US."

"You don't say?" the colonel responded casualy, flipping through the pages of the booklet titled 'DHD' that Daniel had thrust into his hands.

"They do slash zines, you know. Do you think it's slash?"

"What the hell is slash?"

"So what you're saying is they get it on often!" Jack snickered.

"And this is about us?" That question was directed towards Daniel.

The wicked grin spread across the colonel's rugged features. "Then of course it's slash, Danny-boy. What kind of scientist are you to have to even ask that question?" Daniel yelped as his lover's hand found his rear and groped it possessively.

"Indeed," Teal'c agreed, one eyebrow raised as his teammates laughed before eagerly delving into the pages of their newfound treasure. 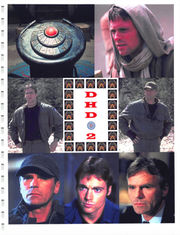 DHD 2 was published in November 2002 and is 256 pages long. Gryphon is the cover artist. 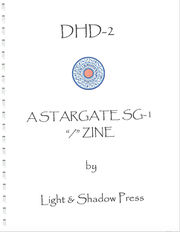 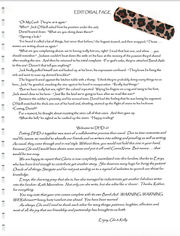 The editorial page has a Band-Aid stuck to it: "You may note that your zine comes complete with its own Band-Aid. WARNING, WARNING, Will Robinson -- heavy hurt/comfort zine ahead. You have been warned."

The editorial, once again, is a meta vignette, one where Jack and Daniel discuss this zine and come to the conclusion they like it because it describes lots of hot sex between them.

DHD 3 was published in May 2003 (debut at MediaWest) and has 144 pages. Gryphon is the cover artist. 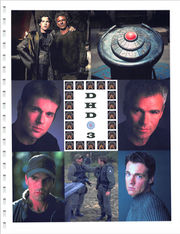 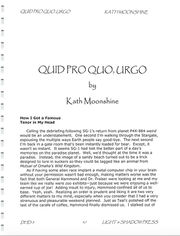 Part of the editorial is this bit of meta:

"I've studied countless cultures but never before have seen such insanity," Daniel Jackson commented as they witnessed the frenzy.

"I, too, am puzzled, DanielJackson," Teal'c agreed. "It must be some latent form of human insanity triggered by this thing they refer to as 'a con'."

The two members of SG-1 stared in disbelief at the horror tbe linguist had come to learn was nicknamed 'zine hell'. Dozens of women, haggard and crazed, obviously without sleep or showers for more tban three days, were hard at work creating zines for the MediaWest convention tbat started in — less than twelve hours.

"What's going on?" Jack queried, taking a big bite out of his apple as be surveyed tbe scene that had his teammates gaping.

"DanielJackson and I are trying to ascertain tbe logic in this yearly ritual. Many of these women appear to be on the verge of bleeding from their eye sockets and yet they continue to apply themselves to this task of zine preparation."

"Zine preparation!" O'Neil repeated, a wicked grin twisting bis features. "Those are the books that have all the really hot stories where we get to have sex in every manner imaginable, right?"

"I suppose you could define it that way," tbe archeologist responded, rolling his eyes.

Tossing his apple and slapping his bands together, the carnal colonel declared with salacious glee, "Bring it on!" 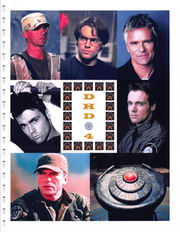 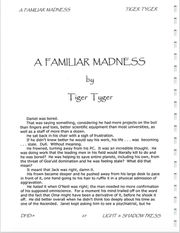 From the editorial: "Well, this zine was very nearly written on time for ConneXions in April. Not on deadline, mind you — we never seem to manage that, but we do try to get finished writing before the con. However, real life appeared to conspire against us in many trying and troublesome ..." forms:

Some meta fic from the editorial:

"Daniel, what are you doing? Using my dining table for a bed?"

The anthropologist blushed from his position, legs akimbo, torso draped across the dining room table and quickly sat up. "Well...

Jack O'Neil leaned his hip against the edge and looked at his lover, his arms crossed against his chest, sable eyes questioning. "Well, what?" Then Jack suddenly straightened and glared at the scientist. "You didn't!" he accused.

"I didn't!" Daniel replied, utterly uncertain of what he was denying, but doing it anyway. "You did so," Jack accused. "You're practicing sexual positions for those women."

It was useless to lie; he was caught. He hung his head until Jack continued, growling, "Without me! What were you thinking?"

"Well, they'll never get it right if we don't show them." The colonel pushed him back and climbed on top of him. "And if I'm going to read it, I want to see it done properly."

Sprawling across his lover. Jack's lips curled in a wicked smile. "Hey, this dining room table idea isn't half bad. What will they think of next? An elevator?"

DHD 5 was published in April 2005 (debut at ConneXions) and has 269 pages. Gryphon is the cover artist. 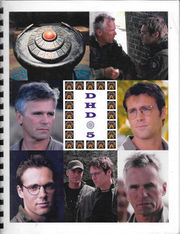 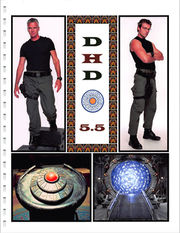 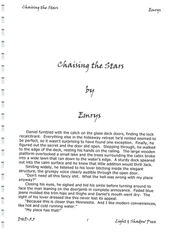 sample page from #5.5, shows the creative spelling of the first fic

DHD 5.5 was published in November 2005 (debut at EclectiCon) and has 102 pages. It partially reprints material from multimedia zines. Gryphon is the front cover artist.

The difference between what you hold in your hand now and what you usually pick up from us is that several of the stories in this volume have been published elsewhere.... just not in a volume of DHD. Many fans don't buy multi-media zines, so they miss out on little Stargate stories that are floating out there in the universe. We've gone out and retrieved those stories for you, packaging them in one place. These stories were all written by members of the DHD writing team you know and love. We've also thrown in a few tidbits: some never-before-published short stories for your bonus enjoyment.

So, if you've purchased zines like La Chair and Bound & Determined, you will mostly likely discover you've read some of these stories before. But if not -- or if you're a completist and have to have EVERYTHING -- then 5.5 is for you! 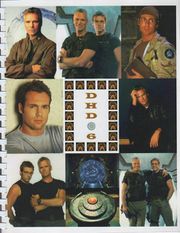 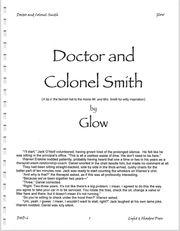 From the meta fic editorial:

"Where's the latest copy of DHD! I want to see what those wacky women are writing about us now."

I yelled back from the kitchen. "We don't have it yet; it's not quite finished. They'll have it ready in May of 2008."

"May! I've waited two years and now I have to wait until May!"

I sighed and tossed a dishtowel in his general direction. "Oh, come on. Jack, cut them a break. They have lives, kids, bachelor's programs, master's programs, old folks, moving, home reconstruction, and three new puppies to deal with, too, you know. And other fandoms. We aren't the only men they write about."

"We aren't?" He sounded offended. Maybe even jealous.

"Not by a long shot," Daniel chuckled. "We're in the same boat as Aragorn and Boromir, Captain Jack Sparrow and Will Turner, somebody called J.D. and Drew, and then there's always Kirk and Spock, the Winchesters, and Starsky and Hutch."

"That must be one hell of a boat. Surprised it doesn't capsize."

They're busy women. Jack, and we aren't their only love afair." 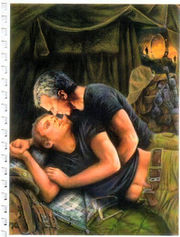 DHD 6.5 was published May 2009 (debut at MediaWest) and has 133 pages. It contains the novella Good Soldier by Kath Moonshine. The cover is by Suzan Lovett.