You may be looking for Cross Streams, a gen multifandom zine.

Crossing the Streams is a mixed gen, het and slash Real Ghostbuster anthology.

From a July 1993 ad in GAZ: "RGB- not just for children anymore. Was it ever? We don't think so! That's why we've published CROSSING THE STREAMS.An adult oriented zine with stories focusing on themes such as friendships, relationships, deep emotions, and sex presented with the same quirky humor RGB is known for. PG-13 to X." 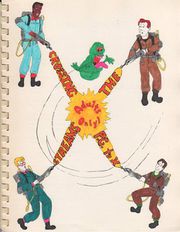 Crossing the Streams 1 was published in 1992 and contains 127 pages. Art by Rolaine Smoot. 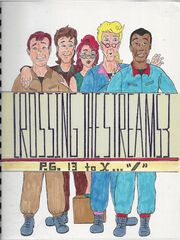 Crossing the Streams 5 was published in 1996 and contains 103 pages. Art by Aurora Black, Eddi Fey.