You may be looking for The Coyote Kid, a Hardcastle and McCormick zine.

Coyote is a 86-page gen novel by Elizabeth Klisiewicz. Color cover and black & white back cover artwork by LJC. 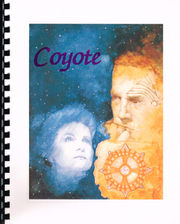 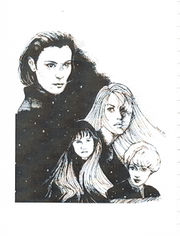 It was originally posted to alt.startrek.creative.

Summary from the publisher: "When Voyager finds a way home, Chakotay seeks refuge on Bajor and is reunited with Ro Laren on a mission to the DMZ to rescue a former Maquis leader. Janeway is among those trying to stop the attempt as spies abound and good and evil become blurred."

From the Author's Notes in the Zine

Coyote is one of those projects that took on a life of its own and refused to die. It started out as a Q story and ended up lying fallow for awhile. I finally scrapped the whole thing and started rewriting it back in July of 1996. First, I want to thank my cool and talented friend Jennifer Pelland (Siubhan), who edited this entire project from start to finish. She is the creator of e infamous Tiny Trek cartoons and the author of the Left Hand of Darkness [sic] [1] series (buy it now). Her sense of humor and indefatigable copyediting kept the cardboard Indian dialogue at bay and helped me stay on course.

Voyager unexpectedly discovers a way to get home, and Janeway must deal with the many issues involved with their return to Federation space, including her relationship with her first officer. Chakotay, on the other hand, is forced to choose between the woman he loves and his heritage. As he tours the ruins of Cardassian-occupied Dorvan V, he unexpectedly meets up with his half sister, a slippery and wily Starfleet officer. The story also touches on the personal stories of Tom Paris, B'Elanna Torres, Alynna Nechayev and a pivotal character named Jana Hunter. When Tom returns home, he is confronted by his father, who delivers the news that his mother is dead. A grieving Tom gets into a spot of trouble and after Admiral Paris bails him out, is forced to examine and possibly resolve his feelings for the old man. B'Elanna is caught in the crossfire between the Federation and the Maquis, and temporarily reverts to the woman we saw in the early days of Voyager's journey. Nechayev, the ultimate Starfleet officer, makes a series of tactical errors that throw her career into jeopardy and cause her to question her precious Starfleet principles. Janeway is swept up in the maelstrom of all these events, and does everything in her power to help the former Maquis from her crew. Hunter is a mysterious woman whose past is linked with Chakotay's sister and a Bajoran named Tor Beral. Her friendship with Chakotay widens the gulf between Janeway and Chakotay, whose relationship is already marred by distrust and broken promises. This novella spans the Trek universe from Voyager to DS9 and back to TNG. Ro Laren is dusted off and pressed into service, and Admiral Nechayev has more depth than the pinched little woman we loved to hate in her faceoffs with Picard. Coyote is a sprawling tale filled with spies, gray characters with unknown agendas, and a close examination of trust and friendship. [2]

Anyone who thinks there are no strong female characters in Star Trek fan fiction need look no further than 'Coyote' to prove themselves dead wrong. Heroines and villainesses, het and lesbian, canon and original, abound. All of them powerful and interesting. No simpering or swooning in sight. 'Coyote' is much more of an action-adventure story than a romance, but relationships do get explored as well. The plot is totally original, the characters are striking, and overall it's great good fun! [3]

I read this one wayback, it seems like. Powerful stuff. Major h/c for Janeway, and ohhh, Chakotay, trying to keep an even keel while dealing with evil, evil Seska. Some disturbing scenes, but worthwhile for the payoff. [4]

This is another excellent story. Beltran is attractive, but I first started to pay attention to Chakotay because of fanfic and Elizabeth was one of the authors who first got me interested in the intriguing first officer. I don't always like her Chakotay, but I always want to read more about him. [5]