You may be looking for Coyote, a Star Trek Voyager zine.

The Coyote Kid is an AU series of gen anthologies of fiction by D.D. Brischke.

From the publisher, "Will the Old West ever be the same? Join Mark "The Coyote Kid" McCormick and Milton "Hunt 'Em, Hear 'Em, Hang 'Em" Hardcastle."

Also from the publisher: "Return with us now to those golden days of yesteryear, when Judges were Judges and Outlaws were hung, er.... hanged. It's Mark "The Coyote Kid" McCormick and Milton "Hunt 'Em, Hear 'Em, and Hang 'Em" Hardcastle against the bad guys in D.D. Brischke's side-splitting alternate universe novel. "

The Coyote Kid 1 was published in February 1988 and contains 55 pages. Cover and interior art is by Jim Flood. 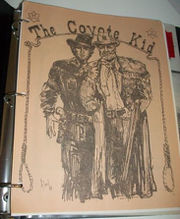 cover of issue #1, by Jim Flood 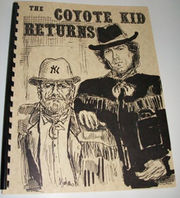 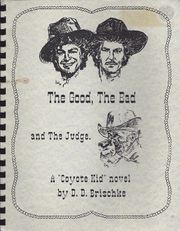 The Coyote Kid 3 is subtitled, "The Good, The Bad, & The Judge" and was published in September 1991. It is a novel containing 56 pages. Cover and interior art is by Jim Flood.

Summary: While working backstage on a Western play starring the Judge, Mark dreams about being a notorious outlaw.

From Media Monitor: "The laughs and puns abound in the Old West when Mark comes up against his evil twin, The Jersey Kid."