The Cordelia movie poster was part of a professional campaign for the film of the same name in 2020, but after some posts (including but not exclusively) on Tumblr and Twitter a fandom was created around the scenarios that the film wished to represent by the specific scene used in its poster. 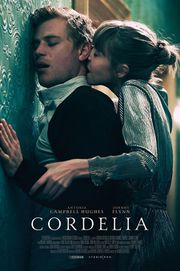 After some people got confused about the veracity of the poster and the real plot of the film (which some doubted existed) Tumblr user adreadfulidea compiled some information about the origin of this fandom:

I’ve got to tell you all about the hilarious journey this image in having on twitter.

1) First, many mistook it for being a historical romance, which is probably the fault of the wallpaper. I also thought this, but if you look closer he’s wearing a modern shirt and the fabric of her dress is polyester or nylon something.

3) This image is probably supposed to be scary? No one in it looks scared, at all?

4) Everyone promptly decided they didn’t care what the movie was actually about. They started writing inpromptu fanfic scenarios based solely on the poster in twitter. I fully expect the AO3 to have a “Cordelia (movie poster)” tag by the end of next week.[2]

Ultimately Cordelia is a horror about a woman and her relationship with her neighbor while living with her twin sister and brother-in-law. With no kind of correlation with the themes addressed by the fandom generated based on the movie poster (which didn't stop fans from creating transformative works).

As of November 2022, there are twenty three works in the Cordelia (2020) tag on AO3, and all of them are based on or inspired by the movie poster. Furthermore, fanartists from a wide variety of fandoms have drawn their OTP in the same pose as the poster.