Cipher was a multifandom fanfiction archive with an emphasis on Harry Potter. It also had an active forum. On September 2, 2011, it was announced that Cipher would be closing as of October 1st. It went offline circa April 2012.[1] 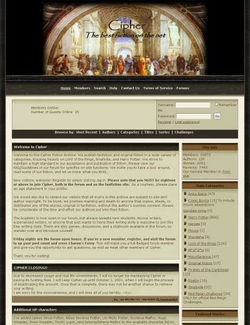 Screenshot of the archive's home page.

Cipher was originally founded by a small group of fanfiction writers looking for a place to archive not only their own work, but particularly fine stories too often lost in the larger archives. A private site for a few months, the decision to go public was made when several truly fine authors expressed an interest in joining the site. From then on, authors were aggressively recruited, and by word of mouth, metaphorically speaking, more and more excellent writers arrived to share their work. Those authors without time to join Cipher gave their permission to archive their work, and Cipher continued to grow.

Cipher has gone through continuous upgrades since its inception in March 2005, moving from forum to forum and striving always to provide its members with more options, more user-friendly technology, and general attractiveness. The last major upgrade took place from April to June of 2006, giving Cipher the high-tech, professional appearance and usability it enjoys today. Cipher stands apart from most fanfiction sites in its demand for quality, its close community, and its visible and involved administration.[3]

The archive was originally founded by Morrighan, who transferred ownership to _Ky_ in October 2007.[1]

In September 2011, it was announced first at the InsaneJournal community[4] and subsequently on Cipher's main page that the archive would be closing. The announcement by _Ky_ stated:

"Due to decreased usage and real life commitments, I will no longer be maintaining Cipher or paying its hosting fees. I will keep Cipher up until October 1, 2001, when I will begin the process of deactivating the account. Once that is complete, there may not be another chance to retrieve your writing.

I am sorry for the inconvenience, and I will miss all of you terribly."[1]

Cipher required that stories be "validated", meaning that they had to be reviewed and approved by the administrators before the could be posted to the archive. The submission rules stated:

"Cipher was founded upon a desire to house and publish quality fanfiction. Every chapter of every story is viewed by our validation staff before publication. Publication at Cipher is a privilege, a compliment, and never a right."[5]

Only stories with proper "grammar, punctuation, spelling, and fidelity to canon spellings and capitalization" were accepted. Stories containing netspeak, major formatting errors, or author's notes within the text of the story were rejected. Additionally, stories would not be accepted if they contained certain content, including: snuff, sadomasochism, bloodsports, scatology, water sports, chan, or self-mutilation (i.e. cutting). Stories would also be rejected if they contained major continuity errors, verb or POV shifts, OOC characters, "unexplained and distracting AU aspects," or ""Toxic Mary Sues or Gary Stus."

Only registered members of the site could submit stories, and no more than two works (including individual chapters or round robin contributions) could be submitted for validation at once. All header information was required, including warnings, a rating, the characters featured, and a summary. The submission page noted: "administrators and validation staff reserve the right to add warnings and change ratings at their discretion."[5]

Fanart and award banners could be posted with stories. Up to three images were permitted per chapter, with a maximum size of 300x300 pixels each.

Initially, administrators would work with authors to improves stories that did not quite meet the submission requirements. However, this procedure was amended in October 2006 due to the growing size of the archive and the perception that the service was being abused:

Cipher is instituting a new policy of simple acceptance or rejection of submissions. This means that we will validate your submission as is--other than very, very small, infrequent corrections, the administrators will no longer correct, suspend, or critique submissions. Too many authors treated this consideration as a beta service, and we have said repeatedly that we are not betas. Therefore, you will simply receive a yes or no answer regarding validation of your submission. We will tell you why we rejected your submission, and you may try to correct the errors and improve it as necessary, then resubmit.[5]

All authors were required to have registered an account before they could submit stories for approval. The account gave them access to a centralized hub from which they could edit their profile, manage their stories, reviews, favorites, and images, and view their statistics. Accounts also ensured that users accepted the site's Terms of Service and were over the age eighteen, as required by the archive for "legal protection."[6]

Users were also able to indicate on their profile whether they were willing to be a beta reader. This did not oblige them to beta read, but encouraged other users to contact them if they were in search of a beta.

The statistics feature displayed a user's bio and status, the number of other users to have chosen them as a favorite, and the number of reads each of their stories had gotten.

Drabbles, Round Robins, and Series

Cipher allowed a story to be further categorized as a drabble, a round robin, or part of a series.

All authors could add to a round robin, which usually had specific requirements. One example of a round robin was "Shower Sex in 100," which required an addition to "be exactly 100 words and involve sex in a shower."[6]

A series could designated either a shared universe or common theme, and could contain work by many authors or just a single author. For example, an author with several stories whose plots follow one another could create a series for the works, or a series could be created for stories with a certain trope that allowed any author to add a work to it.

All registered users could issue challenges for other authors to complete, and a story written for a challenge could be submitted directly as a response to it.

Additionally, the archive hosted an official challenge called the Red Reign Challenge, which ran every few months. For each round, the Cipher administrators chose a winning story which was presented with a banner and potentially other awards:

Cipher's definitive challenge is the Red Reign Challenge, which begins every couple of months. We choose among the submissions for a first-place entry, and award a prize banner as a minimum-depending on the scope of the challenge and the number of entrants. There are occasionally some very nice surprises for our winners.

[...] For the Red Reign Challenge, Cipher's administrators will either accept or return the story, but we will make no corrections to it whatsoever.[6]

In addition to the Cipher forums, there were five chatrooms for different purposes:

In choosing the Classical Greek theme, wide vistas of entertainment opened up for Cipher's administrators. The role-playing involved in the game is intended to be a draw, a distinctive feature of Cipher, and an opportunity to indulge our creativity. With the reputation and promotions features offered by vBulletin, Cipher's forum software, members will discover hidden areas of Cipher as they post, and can determine when they first join whether they prefer to be good or evil, and finding different areas of the board in that choice.

Aside from games, book discussion, role-playing, and general chatter, we also focus intensely on writing. We have areas for both fanfiction and original fiction, as well as a writing academy. There are new classes on a semiregular basis, covering description, characterization, action scenes, sex scenes, and any other facet of writing or areas of difficulty we can identify. General discussions about all things writing are constant and open to all.[3]