From Fanlore
(Redirected from CHOICE PARTS)
Jump to: navigation, search

You may be looking for Choice Cuts, a clipping zine.

From the editors: "Just a bit more on the adult side. Stories won't be turned down because of sexual content, but we don't want hard x-rated stuff either. Editor's discretion and stories will be judged individually. Again, the emphasis is on QUALITY."

Regarding the cover: "I'd like to thank Martie Benedict-O'Brien for supplying the name of this zine, however inadvertently. To quote her: "One day I was just sitting around with all my tapes of Harrison, enjoying his choice parts — er, roles! His choice roles!" I think she was right the first time!" 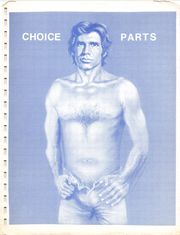 back cover from issue #1, Dianne Smith 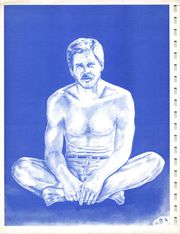 back cover from issue #1, Jim Markle

Welcome to the first issue of CHOICE PARTS. This zine has been longer in the works than any other I've ever done, but I think it's been worth waiting for. I'm very proud of all the material in this debut issue. I hope it's just a foretaste of things to come.

First off, I must apologize to Dianne Smith. She did the knockout guy on the cover in color especially for this issue. Well, this isn't exactly the "color" cover I had planned for this issue, but there just wasn't enough of another color — namely green -- to do the full color cover we had wanted. One reason CP has been so delayed is that I had been trying every way I could think of to stretch the budget to cover the cost of a color cover. No matter how many ways I stretched it, some part ended up bare. So, rather than sacrifice the quality of the rest of the zine, or delay it any longer hoping the money would turn up, I decided to go with this version of the zine and get it into your hands.

First, I love the title. I think Martie was right the first time, too. Every thing was excellent, as usual, and I enjoyed the whole issue very much.

I hate to single out any one contribution as better than the rest because I liked everything, but I would like to mention a couple.

"Second Chance" — a plausible explanation behind Lido's trip to Shanghai. I wondered what kind of artifacts a person would find there. A post at his old university was certainly the right incentive to get him to go after the diamond. Not too many people get a second chance in life and he would have to be a fool not to take it.

"Han's World" — an interesting look at some of the places our favorite spacer has been in his travels, accompanied by Wanda's fabulous artwork.

"Standing in Your Shadow" — I think a lot of fan writers have this problem. Although they want to write "real" novels, paying stuff, these people from another galaxy keep intruding.

"Remembrance" — more great stuff from Carolyn. Her writing just keeps getting better and her past history for Han Solo is one of the most complete I have read yet. Best of all, everything in her stories comes across as a real person. You really care about what happens to them and the world they live in.

"Chance Encounter" — the main reason I was interested in CP. Princess Leia and Tommy Lillard? Impossible, I said, but Kate did a good job in pulling it off. She has them both down to perfection. Cross universes mist be diffi cult at tte best of times, and two of them as diverse as these, harder than most. I liked the bit about there being a language barrier between Tommy and Leia. Although it was convenient for Solo and company to speak English in the movies, I don't think such would be the case. Most likely, they wouldn't understand each other at all. It does appear that the princess had an implanted translator besides the he had in the life pod. Tommy and Solo are so much alike that I wonder perhaps if the outlaw isn't an ancestor of the smuggler. They even look alike, a fact that everyone noticed but the scoundrels in question. Although frustrated with the stubborn princess, I think he was beginning to like her more than just a little by the time the others came for her.

I wish I had time to mention everything but I have to close. Hoping to see CP#2 before too long. [1]

I thought I would write a brief LoC re CHOICE PASTS because of how much I enjoyed the zine. I don't know if you're printing LoCs and you don't have to answer this as a letter, but I can't keep returning to a zine like this and not write something to the editor.

CHOICE PARTS is another Harrison gem. The tantalizing cover was (even when warned) startlingly compelling. I enjoyed everything. Only way to find Harrison these days, it seems, is in fanzines. So this won't get too long, I will mention the pieces that I was particularly drawn to. I hope I don't offend any by emit- ting some other fine work, but it's the only way I can approach a LoC.

"Second Chance" by Jearmie Webster was a nice follow up to events in TEMPLE OF DOOM and I do enjoy Martynn's work on Harrison/Indy.

I enjoyed Martie Freeman's poem "A Man Like Light" and the different perspective of the boy. I could identify strongly with how Samuel felt.

"The Cue That Got Away" by cypher, what a fun story! The art by Wanda Lybarger, as always, is breathtaking. I would never have thought it possible to actually pull off a story about Han as a fish! Cypher has got some imagination! If many of these Harrison writers aren't professionals, they should be.

It was nice to see Kenny Boyd again. "Pastorale" by Elizabeth Wilson was very good, but sad. Seems to me Harrison played his Kenny in that realistic style long before Oliver Stone made it fashionable.

The portraits of John Book by Dianne Smith. What can you say about these? She captures the vulnerability in Book's eyes. I can read volumes in them.

Tomny Lillard's appearance in "Chance Encounter" is wonderful reading. Kate Birkel has written a light-hearted episode filled with a favorite device, universe crossing, literally speaking! When Tommy meets Leia with her stun blaster, he's really met his match and I could imagine all kinds of pictures of Tommy even beyond Wanda's adorning companion art. Tommy and Leia facing off with blasters was cute but what really lights me from the inside is the piece Wanda did on page 95 of Han, all cocky self-assurance, meeting Tommy, all anxious vulnerability. He is, after all, out-numbered by the oddest array, and Han's anger is not one I'd like to run into even in a lit alley. Of course, he's not dangerously angry, just self-righteously so. Kind of strange for him; Harrison meeting himself is always a fun theme, too. I hope more writers will find an excuse to write more of these cross universe stories. When they're well written like Kate's, they're a delight.

One point about the above story I was surprised to read was the name of the character called Ben Murphy. Ben Murphy is the name of an actor who played Kid Curry in ALIAS SMITH AND JONES and cue of the few actors would could ever give a TV western outlaw a gentle touch with fire underneath. Harrison could do it and Ben Murphy could but the poor samples of TV westerns caning out today are being made by people who just don't know the ropes. They don't even have the barest essentials, like the rules of gunplay. If you went for your weapon and weren't fast enough, you had already writ- ten your death sentence. I'm sure the nasty Ben Murphy character had nothing to do with that fine actor.

This is a zine I find myself returning to again and again. I hope there'll be a CHOICE PARTS #2 with as many fun encounters! [2]

I have a bad tendency to either comment in great detail on everything in a zine or say I won't and then do so anyway. But this time I really will try to restrain myself because you're probably more than busy. So here goes: Hie only garment I'm going to make about the front cover is one that a non-fan friend made while looking at it. She just kind of ogled it a bit then said, 'That's a very good drawing." Let's just leave it at that. As for the "Selection of Choice Parts", well, I'm still trying to wipe the saliva off. Sigh.

I loved the poetry in CP, especially the wicked, wicked limericks by Cypher. God, but I love evil puns. Other poetry I have to mention is Martie Freeman's "A Man Like light" (sigh) and Pat Nussman's "Sweet Victory" (a different kind of sigh). As for stories, Carolyn Golledge' s "Remembrance" was excellent and now I'm really interested in her Falconers series. Do we ever find out Han's real name?

"Chance Encounter" was really good, too. Poor Tommy, saddled with Leia and all (ha-ha, ’’saddled", no never mind). Too bad he didn't remember any of it. "The One That Got Away" — Han and a fish?!! That is new! Fascinating, the things that Cypher can think of — she's such an excellent writer. I loved the story. Han has this thing about Ch'thorians, though. They show up in Cypher's "The Medicine Show", too. Hmm. Maybe I should grow my hair... Of course, I didn't mention the other things I liked; for example, the Kenny Boyd story and the hysterically funny Harley-David- son Leia cartoon.

And all the other things in CP. But I guess now I have mentioned them, so I better go. Thanks a lot for sending me CP, and I look forward to the next issue.[3]

Choice Parts 2 was published in November 1989 and contains 133 pages. 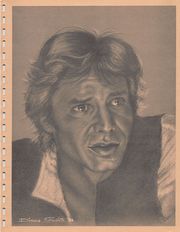 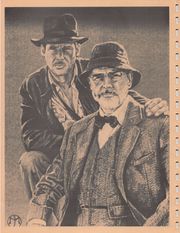