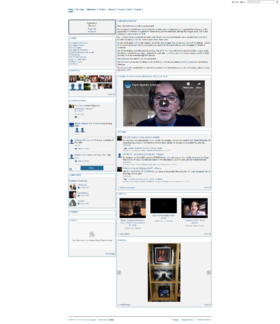 Big Light Network (also known as the Big Light Social Network) was an online platform that had been created in May 2008 around the production of the second X-Files feature film The X-Files - I Want To Believe to connect fans of the works of Frank Spotnitz from all over the world. It was part of the official website of Spotnitz' production company Big Light Productions. It used the technology of social media platform Ning.

The network played a large part of the second wave revival of Philedom since a lot of fans used it to connect to other fans and Spotnitz to learn about, organize and attend the various promotion activities around the release of the second X-Files feature film in July 2008.

Spotnitz, Annabeth Gish including some other TPTBs as well as the networks'X-Philes community also helped the win Ology.com's "Most Far Out Show" contest in 2012 where the top participants one a limited, custom designed t-shirt.[1]

Until it's demise the Big Light Network hosted a total of 1,468 Members and contained about 14,324 Photos and 1,127 Videos. The message board included sub-boards for:

Due to a relaunch of the website, the social network had been discontinued:

Hello fans and friends of all things Big Light!

We’ve always loved the fact that so many friendships and amazing moments happened here because of the opportunity to connect in this platform. Some of my greatest memories with the fans began as an idea in this community. I am proud of all of it!

But... though I loved having this private corner for all of our fans and friends, we’ve decided that it is time to transition & adapt to how we relate to each other these days.

As part of the launch of my new website, we will be able to enjoy features like the return of my mailbag - where I’ll be able to share and reply to your questions, and we’ll also count with my personal pages on Twitter & Facebook.

We will be shutting down the network on Aug. 1st, 2019. You have until then to save all photos, videos, chats, etc. that you shared in your pages, shared with each other, as well as any information, contacts and links that you may have accessed through the network.

After that date, the network will be unavailable.

We don’t want you to lose anything, so get on it! If you have issues, head over to Avi's page and leave her a message!

Thank you for the wonderful times and conversations; I look forward to sharing the new website with all of you very soon! - F.S.

It was initially planed to close on August 1st 2019 and eventually closed down on August 9th 2019, so that the users had time to back-up all their content and data.