Beneath the Mask was a newsletter/letterzine published by the Phantom Appreciation Society, an international Phantom of the Opera fan club.

The first four issues of this fanwork were titled "Masquerade" (sometimes "Phantom’s Masquerade"). The name was changed due to the prior existence of a musical theater zine of the same title. This means "Beneath the Mask" begins with issue #5.

Beneath the Mask published interviews with Phantom cast members, news and reviews, in depth articles on topics relating to the Phantom of the Opera, and letters from fans in which every aspect of the story were discussed and debated. It was sold by subscription to the Phantom Appreciation Society, in Dress Circle in London, and by the Avon Boutique in Canada.

Beneath the Mask was limited by geography in its coverage of the Phantom world, for its main writers and publication base were both British. Despite that, BTM managed to cover a globe's worth of Phantom-mania to an extent you won't find in other Phantom publications. All aspects of fandom come under to scrutiny here: ice shows, books, scene analysis, Phantom movies, various cast recordings, and exclusive interviews with cast members from all productions. Where other fan presses have spilt ink on Phantom cartoons and short stories, BTM's main thrust is analysis and hard information reporting.[1]

This time I have what I think is the entire run of the fanzine Phantom’s Masquerade, sometimes shortened to just Masquerade, which ran from 1993 to 1994 and had only the four issues. Like POTO Magazine, it was a fandom magazine that included reviews, letters, information on various versions of the Phantom story, rumors about new developments, and so forth. It was created and distributed by The Phantom Appreciation Society, an international Phantom fan club based in Britain that also put out the Beneath the Mask ‘zine that we’ll also be seeing later.

<...> These [this zine and Silent Night, Lonely Night] were among the ‘zines that relied on fanart for their cover and interior images, as opposed to some others that took the approach of photocopying official artwork or photographs from performances instead. [2] 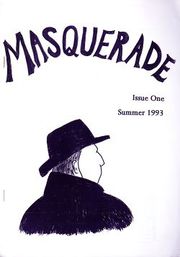 front cover of issue #1, appears to be uncredited

The Issue One (titled "Masquerade") was published in the summer of 1993. 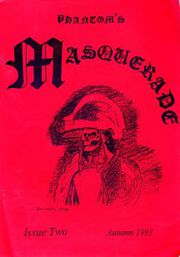 The Issue Two (titled "Phantom's Masquerade") was published in the autumn of 1993. 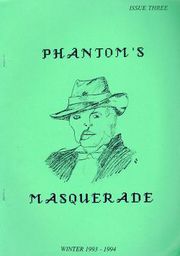 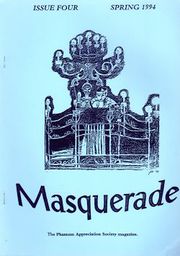 The Issue Four (titled "Masquerade") was published in the spring of 1994.