Beginning Writers is a May 1977 written re-cap of an audio-tape of a panel discussion that was originally held at SeKWester*Con in April 1976. 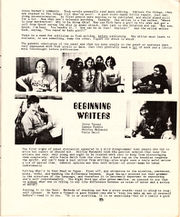 first page of the article as it was printed in the SeKWester*Con, Too program book 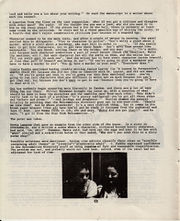 second page of the article as it was printed in the SeKWester*Con, Too program book

It included some of the earliest discussions of age statements and rating fic on content.

Excerpts from the Essay

The first signs of panel discussion appeared in a mild disagreement over people who try to write but cannot or should not. Shirley Maiewski took the gentler opinion that many fan writers are very, very young and ought to be treated with care to keep from discouraging them completely, while Paula Smith took the view that a hard rap on the knuckles toughens the spirit, and can't keep a real writer from writing — also might save a truly awful writer a lot of wasted time. General opinion was that each writer -- or story -- must be taken individually.

Putting What's in Your Head on Paper: first off, pay attention to the niceties, sentences, nouns, verbs, and knowing the difference between. Joyce Yasner pointed out that grammer [sic] [1] is the structure of the language, and therefore it is extremely important in expressing one's self conprehensibly [sic]. The Right Word was also given mention, as opposed to one that is almost what one is trying to say (the difference between an ocean of water and a notion of water.

Putting It to the Test: Methods of checking out how a story sounds -- read it aloud to yourself (alone). Or have a friend -- a good friend -- one who's "seen you make an ass of yourself before" -- read it to you. "It is so startling, it is so unsettling — but it's really a good tool and tells you a lot about your writing." Or send the manuscript to a writer whose work you respect.

A question from the floor on the last suggestion: what if you get a critique and disagree with every word? The reply: if you thought the guy was a jerk, why did you send it to him in the first place? If the person has a lot on the ball, there is probably at least some truth in the criticism. Or there may be a third possible way of writing the story, or a fourth -- but don't reject constructive criticism just because of a wounded ego.

Connie Faddis mentioned having trouble writing Janice Lester (in "A Lesson in Perspective," WARPED SPACE XX) because she did not like or identify with Dr. Lester, and she did not want to. "If you're gonna get into it you're gonna run into deep emotional scars... you're going to run into characters that are difficult to write not so much because you can't get that out, but because you don't want to get it out -- because then you're going to have to deal with it.

Sex has suddenly begun appearing more blatantly in fandom, and there are a lot of very young fen out there. Shirley Maiewski brought the issue up, with a question of what should be done to keep the pornzines and the smallfen away from each other. This didn't really look to be much of a problem -- "it's pretty sublimated — you've got all those ships and harbors and prows—" "-- and hotdogs and doughnuts --" Shirley dimmed the general hilarity by pointing that the Welcommittee directory goes out to six-year-olds. "Should we rate them? And by whose standards? It's a very ticklish thing. Say it comes in its brown paper wrapper (they all have bpw's) and he reads it (screams from the audience) and lays it down...and Mamma finds it (oh, oh) and says, "Where' did you get that?!" and he says, "I got it from the Star Trek Welcommittee..."

The point was taken.

Possible solutions were mentioned: having zine editors classify their zines as "possibly containing adult themes" or "juvenile"/"graphically adult". C. Faddis expressed confidence in the Welcommittee Directory staff as being capable of fair and reasonable classification. The problem was not, and probably would not have been, solved, even if the panel had not adjourned for lack of time.