Beauregard Lionett (also known as Beau), is one of the main characters in the Second Campaign of Critical Role. She is played by Marisha Ray

I think Marisha has talked before about how one of Beau’s main problems is how young she is, and how invincible that makes her feel. Like when she almost died with the troll - “she should be traumatized!” “Have you met Beau??” She thinks she’s so cynical (“I’m not used to things turning out… good.”) but she’s got the kind of blind idealism of youth, the feeling that really bad things happen, yeah, but they happen to other people.[1]

Fandom sometimes (especially in the early days) refers to Beau as a "disaster lesbian" due to her inability to be charismatic. 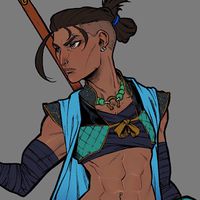 Most popular Beau ships are femslash: Beau/Yasha and Beau/Jester, with canonical one night stands Beau/Reani and Beau/Keg rarely making an appearance in fanworks. There's a distinct conflict between some beauyasha shippers and beaujester shippers. (see more: beauyasha vs beaujester) One fan questioned Beau's reliability when it came to her own feelings towards Jester and Yasha:

don’t think Beau is as reliable of a narrator of her own feelings as a lot of people in this fandom seem to think.

This is both about her talk with Veth and about her talk with Fjord. I’m not saying that she doesn’t know her own feelings, but she is a lot more nuanced with who she tells what and how she phrases things than people give her credit for. She told Veth about her crush on Jester in a moment of trust and bonding, a moment where Veth was opening up about her own feelings for Caleb. “What is it about Jester?” - Well, maybe the fact that she’s hot is actually pretty high on that list (and that is - by the way - good and okay), but maybe it didn’t feel right to say in that moment. Or maybe the crush had started as a physical attraction and had at that point began to morph into something deeper.

And in her conversation with Fjord, Beau had been the one to approach him about the subject. She had noticed that her captain - who is notoriously reserved about his romantic feelings - had been opening up to Jester, and she wanted to give him an opportunity to talk through his feelings. That’s not the right time to say “Oh, and by the way, I’m currently getting over an intense crush on her”. Especially not after Fjord had said that he didn’t feel like he deserved Jester or was good enough for her.

There are two people in every conversation and Beau, like everyone else, is curating her words to whomever she’s talking to. My assumption is that her crush on Jester was extremely confusing for Beau and that the truth of her emotions lies somewhere between what she told Veth and what she told Fjord.

So, no, I don’t think Marisha is retconning this. I think she’s being consistent with a character who is having trouble being honest in even the most trivial of circumstances. I trust Beau’s actions more than I trust her words, and her actions are full of love for the M9, including and especially Jester. [2]

Events particularly between episode 112 The Chase Begins airing October 15 2020, and episode 120 Contentious Company airing December 17th 2020, further developed the relationship between Beau and Yasha, ultimately leading to Beau asking Yasha out on a date. Both characters expressed mutual interest in each other. See Beau/Yasha for more details about canon and fandom reactions.

Two most popular platonic ships are Fjord & Beau and Caleb & Beau, both with a heavy familial vibe that the fandom loves. While Beau's relationship with Fjord has a more distinct mentor aspect, her dynamic with Caleb is more that of siblings.